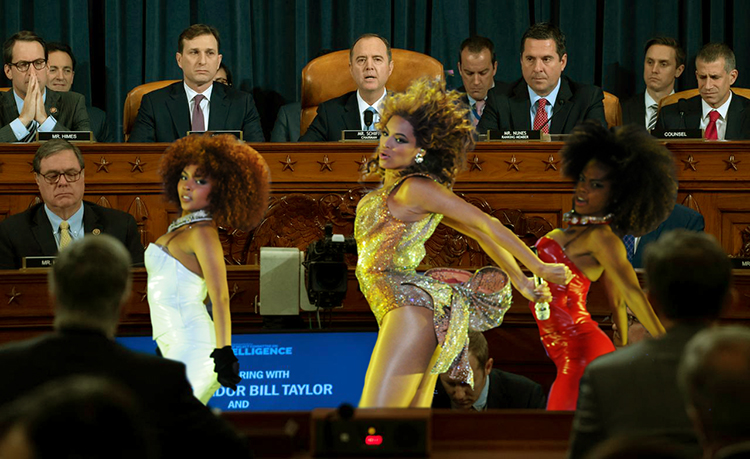 IN A desperate bid to garner interest from the lethargic American public, officials involved in the Trump impeachment proceedings have announced that Beyoncé Knowles will perform at today’s Superbowl-styled halftime show, along with an array of supporting acts, WWN can confirm.

Citing poor concentration skills and general apathy among American voters, it was decided entertainment during an interval was needed to increase interest in the country’s latest impeachment proceedings, which was initially billed as “the most entertaining impeachment of them all”.

The investigation into president Trump’s alleged scheme to coerce Ukraine’s president into opening an investigation into an election rival or face military aid being withheld is now into its second day, with its findings expected to change “fuck all” in the minds of Trump supporters.

“God damn witch hun’ if ya ask me,” spat Alabama soybean farmer Randy Stevens, who said he will vote for Trump again despite losing thousands in revenue this year due to the ongoing trade war with China, “Mr. Trump is a good man and understands small folk like me more than anyone else I know… he even killed ISIS,” Stevens added, hocking out a large brown pile of tobacco.

The halftime show will also feature an indoor fireworks display. Ever the restrained and dignified leader, president Trump has vowed to continue to incriminate himself and justify the impeachment inquiry on Twitter before ultimately taking to the stand to scream ‘You want the truth? You can’t handle the truth’.