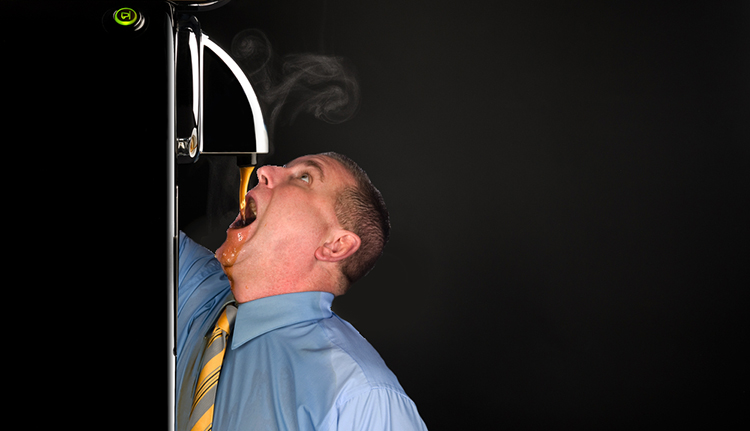 SAVVY caffeine fans have outlined their plans to lie underneath coffee machines and allow the scalding hot liquid to pour directly into their open mouths, in a bid to avoid the incoming 25 cent single-use coffee cup levy aimed at tackling excess waste.

“The government think they can force us into buying re-usable coffee cups with this price-based incentive, but we’ll show them!” said one latte-loving Waterford man we spoke to, through his heavily bandaged mouth.

“You can’t charge us 25 cent extra for single-use coffee cups if we don’t use them! Ha ha! You can’t make us care about the environment if we’re over here playing the smart game!”

The anger of coffee drinkers at the government’s audacity to try and reduce wastage was heightened by caffeine purists who claim that part of the pure joy of drinking takeaway coffee is the added depth and richness of flavour that can only come from drinking out of a leaky wax-lined cardboard cup.

“You can take my cardboard single-use coffee cups out of my scalded red hands” said one lad we talked to in an Applegreen, sucking a red-hot Americano directly out of the machine.

“I see people drinking out of reusable cups, flasks and glasses… fuck that. What am I expected to do, rinse that? Carry it with me in the car? Hell no. Single-use all the way, just try and stop me”.

So far, not a single coffee vendor has agreed to waive the 25 cent charge for people who pour burning coffee into their throats, and have instead implemented their own 25 cent “clean-up and call ambulance” charge on anyone stupid enough to try.