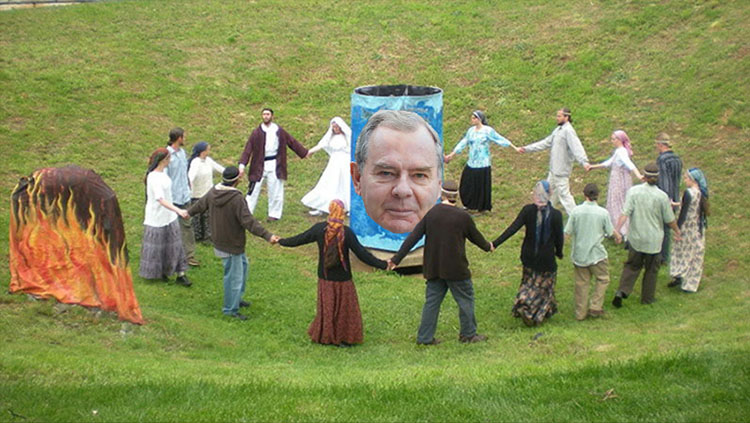 WITH numbers of practicing Catholics in Ireland dwindling by the day, many desperate people have resorted to joining a growing number of cults, including Scientology, McGregorism and even Satanism, but one emerging cult has recently come to the fore due to its dangerous practices and backward ways, the cult secretly known as ‘Children Of The Quinn’.

Arriving in a rented ‘CN’ registered car and wearing one of those woolly diamond designed farmer jumpers to avoid detection, my first stop was at a local petrol station to get some fuel, only to be nearly outed straight away.

“New car is it?” the suspicious staff member asked me as I gave him my pump number, “the only people with new cars around these parts are working for those shower of bastards in Aventas,” he went on, now slowly reaching for something under the counter.

“C’mere, hi,” I quickly responded, memorising one of a list of Cavan come backs I learned in my 6 months of research, “I’m after robbin’ that from outside Aventas –  it’s one of the Lunney’s cars”.

Placing a large sawn off shotgun on the counter, I was relieved to see the staff member laughing, before offering me his hand, which bore the anitials S.E.A.N on his knuckles.

“Elder Holden is my name,” the man said, now shaking my sweaty hand, “I presume you’re going to the effigy later?”

Intrigued and filled with terror, I responded: “I wouldn’t miss it for the world, Elder Holden, but I’m after forgetting the location”.

Happy with my look, accent and crime against the Lunney family, trust was gained and my new found friend detailed a small map where ‘everyone was meeting later’.

“You’ll need to wear this,” he said, handing me robes branded with the Quinn logo, before adding, “may Sean be with you, brother”.

“And also with you,” I replied, successfully gaining his trust – I was in.

The map was written in pigeon Quinnlish, a secret dialect developed a decade ago by Quinn supporters and friends so that they could talk freely without being compromised, a dialect I spent months learning and was now fluent in.

“Anglo” a road spotter said as he stuck his head into my open driver side window, “Golden circle?”

“Anglo,” I greeted him back, before confirming, yes, I was part of the ‘golden circle’ – a code name for the Children Of The Quinn cult – and not an imposter looking to break this cult wide open.

Parking up ‘the stolen car’, my friend from earlier, Elder Holden, walked over to greet me.

“Come on, the chosen one is about to burn him, brother, let’s hurry,” he said, now dragging me by the hand to a huge crowd of cult members standing around a giant effigy of an Aventas executive.

A single figure appeared suddenly from behind the effigy brandishing a burning lantern pluming with black smoke. His eyes were dark and beady, hair as white as snow, his accent, thick as shite.

“Sure, tis only a bit of craic,” the lone figure winked, the crowd laughing manically at his raging sarcasm, now egging him on.

“Soon, my pretties, it will all be ours again, forever and ever, ’til Quinndom comes, ’till Quinn do us part,” the madman roared, lighting the straw and wooden statue to a thundering blaze, “mwahahaha…” he laughed, “mwahaha… ” he laughed again for equal measure.

Standing there in the desolate field with the children of the Quinn, one could not help but be sucked in by it all. I found myself shouting at the flames and kicking what was left of the fire scorched effigy. I felt alive again. I had a purpose. I was part of the family now.

The people here seemed almost normal, however, should we have drove to the Quinn group HQ after the effigy last night and torched all the cars in the car park? No. And was the burning of the 100 foot effigy representing a businessman just trying to do business wrong? Yes, but in hindsight, these people had purpose now after years of austerity and job losses, and you have to admire the Children Of The Quinn for their community spirit and eagerness to band together like that to terrorise a handful of people just doing their jobs.