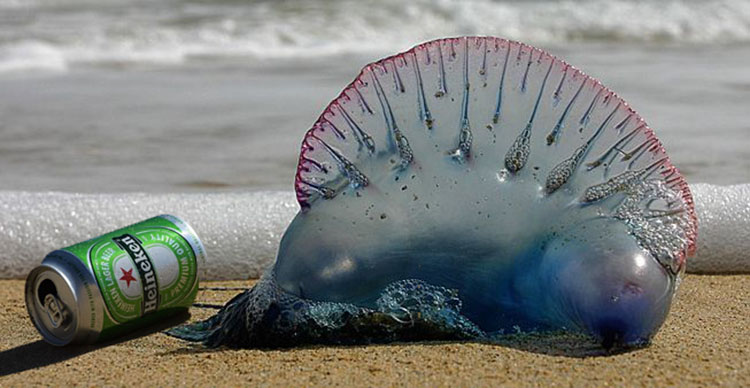 THE LETHAL Portuguese man-of-war jellyfish known as ‘Manny’ has had some fairly hairy benders in his time, but even he admits that waking up on a Tramore beach with no idea as to how he got there was ‘pretty fucking intense’.

Manny, who had been drinking with a shoal of his fellow stingy hydrozoans for a week straight, says he has no memory of how he ended up so far from home, and that his hangover is bad enough at the minute without that fucking kid poking him with a stick.

Experts are suggesting that Manny along with thousands of his pals may have been blown into Irish waters by Storm Lorenzo last week, which locals are saying is ‘all well and good’, but who’s in charge of sending them home?

“He washes up on the beach there, stinking of seawater, along with all of his mates” said one local, bringing Manny a phytoplankton sandwich out of sheer mercy.

“There was a load of them on the lash in the Azores and then the storm hit and… well, that’s where it gets kinda hazy for him, poor fecker. I’ve been known to go on the rip myself and end up in strange places, but a whole other country? Best of luck explaining that to the woman-of-war back home”.

UPDATE: Manny has since dissolved after necking a pint of Dioralyte.