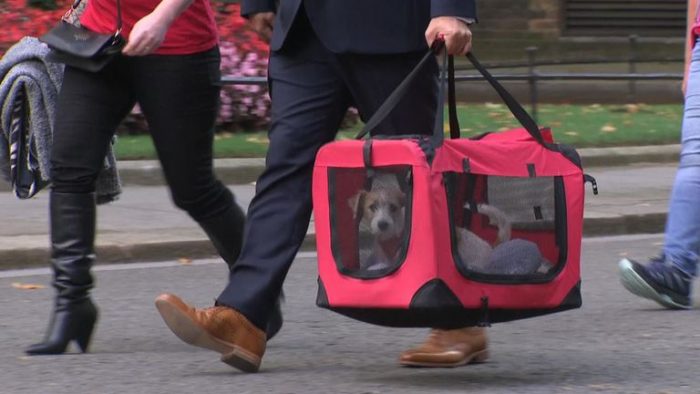 TRAGEDY HAS struck the British government at the pivotal moment when Boris Johnson should have finally been able to celebrate handing over new ‘alternative arrangements’ Brexit plans that were set to transform negotiations with the EU.

Dilyn, the newly installed pet dog at number 10 Downing Street is said to have eaten the amazing plans scribbled on some A4 sheets, according to the one and only eye witness Boris Johnson.

Johnson’s bad luck seems to know no end as he has unfairly been admonished in recent days for lying to the Queen, purposefully inciting anger against rival MPs with targeted and calculated rhetoric and generally being a massive shit.

EU leaders had gone record in recent weeks exclaiming their excitement at Johnson’s repeated declarations that he had detailed fantastic and earth shattering new positions on the Backstop among other things, however the plans were never shared with EU and now, sadly, have been lost forever.

Veterinary surgeons sat Johnson down and repeatedly asked the Conservative leader if Dilyn had genuinely eaten his Brexit homework, as such are the documents’ importance, surgeons would be willing to sacrifice Dilyn to retrieve them in the hopes of partially salvaging Britain’s economic fortunes and restoring stability and civility to the nation.

Staring directly into the puppy dog eyes of Dilyn, Johnson, who has been caught lying repeatedly throughout his life, grimaced as he weighed up the dog’s fate.

“That little fucker ate my homework, I swear to you,” Johnson shared, now sheepishly looking down at his feet.

As the surgeons took Dilyn away for surgery, Johnson began frantically searching online for an excuse as to why freshly digested A4 paper could have appeared like it was never in a stomach to begin with.