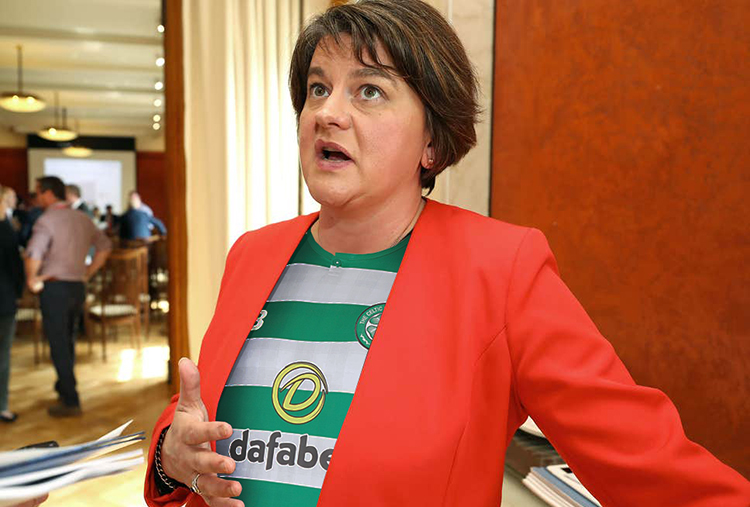 THE DEMOCRATIC Unionist Party has been recognised for its singular and lasting contribution to securing a United Ireland at an emotional ceremony in Derry earlier today, WWN can reveal.

On a stage filled with prominent Republican dignitaries such as lads in Celtic jerseys, DUP leader Arlene Foster accepted the award on behalf of her party who the United Ireland Alliance said “have done more in recent years than anyone else in working non-stop to bring a United Ireland closer than ever”.

Speaking solely through Irish about the Cash for Ash deal, pushing for a Hard Brexit and generally completely ignoring the will of the majority of the people in Northern Ireland on almost every major issue, Foster said she was delighted to be invited to Derry, not Londonderry, and that while the award was a recognition of the DUP’s sterling work, they would not slow down their United Ireland efforts any time soon.

Foster then humbly raised a triumphant fist skywards, as the crowd praised her and her party colleagues for all the work they haven’t done in Stormont since January 2017. She then broke out in an impromptu rendition of ‘Come Out Ye Black and Tans’.

“The thoughts of a United Ireland actually becoming an achievable goal just 3 years ago, well it was laughable but we owe the DUP so much,” shared one Celtic jersey wearing Republican, who’s mother was a Bobby Sands mural and his father a pint of Guinness.

“Just listening to all of Arlene’s absolutely fucking mental ideas, it really does feel like she’s hell bent on making a United Ireland ever more tempting and the only reasonable outcome in the years ahead – a true patriot if ever there was one,” added the man.