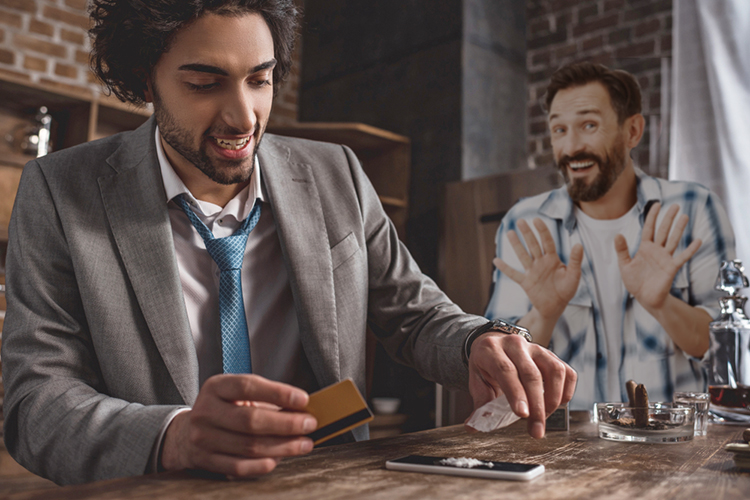 A COUNTY Waterford man who refused to try even a teeny weeny line of cocaine at a friend’s house party has been branded a goody two shoes by peers who insisted he should head off for a nice long run for himself if he’s going to be like that.

Brian Noonan, who was probably the teacher’s pet in school by the sounds of him, told friends to ‘work away’ and not to worry about him while he simply stared at the queue of participants as they carefully chopped down the 22% grade cocaine powder they bought for 100 euros a gram from a local low level dealer.

“No, seriously, you work away there, I tried it once and all it did was make me want to go for a shit,” Noonan insisted, biting his lip instead of debating the quality and source of the group’s latest underworld purchase, before lying through his condescending teeth, “I don’t have a problem with it, it’s just not worth the horrible come down and I have to drive tomorrow”.

Isolating him even further, friend after friend continued to snort a line for each nostril while shooting their heads back in overly animated gestures of indulgence, despite receiving very little satisfaction from the low grade cocaine.

“I can’t feel my face,” one connoisseur revealed, unaware the feeling was a dental anaesthetic cutting agent numbing the back of their throat, “I feel like one of those famous and privileged people now, although slightly nervous and not really enjoying the buzz, but at least I’m not a goody two shoes like Brian over there, judging everyone”.

Following a brief chat amongst conspirators in the downstairs toilet, the once group of friends decided it was best to physically remove Noonan and his smug face from the session, citing the possibility of him “being a member of the DS or a dirty fucking rat bastard”, just to be safe.