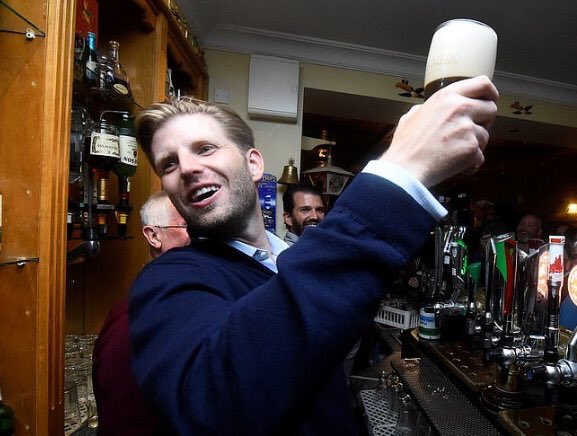 This notes the first day of unprofitability in the company’s 260 year history, and puts a firm dent in the notion that the alcohol industry in Ireland is capable of withstanding anything.

With ratings agency Standards & Poors downgrading the previously Triple-A company to a rating of ‘shite lads, might be fucked’, PR bosses are scrambling to undo the damage caused by the Trump boys heading on a pub crawl.

“Hundreds of years of Irish people happily supping stout, and then you have these two toady bastards ruining everything” said one sweat-lashed Guinness exec.

“How, how, how do you fuck up something as simple as a celebrity with a pint of Guinness? As a nation, we turned a blind eye to a hell of a lot during the Trump visit; the racism, the homophobia, the whole… Trumpness of the thing… but a pint of Guinness as bad as that? The company, no, the nation may never recover”.

Guinness is expected to rebound a bit in tomorrow’s trading, as it is a Friday after all.