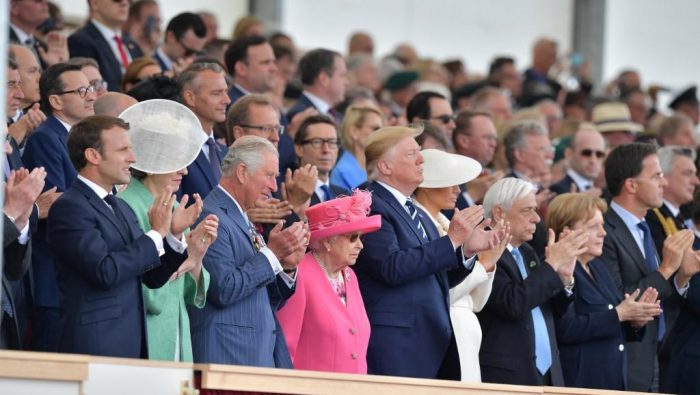 TODAY’S WORLD leaders descended on France to mark the 75th anniversary of the D-day landings in Normandy, in the company of veterans of the landings who sought to turn the tide of World War II and courageously battle against the existential threat posed by Nazi Germany to secure the freedoms we now today take for granted.

The sombre commemorations, remembering the incalculable and incomprehensible bravery and sacrifice of the so-called ‘greatest generation’ would melt the coldest of hearts, warm the harshest of cynics. WWN has compiled the highlights of proceedings as international leaders tried to sum up the debt owed those who fought for Europe’s freedom.

“Possibly the best landings ever, some people are big fans of the C-Day landings, others like the E-Day landings a lot, but my favourite is of course the D-Day landings” Trump said as part of his remarks, which will be erased from all records of human history as soon as possible.

Later Trump struggled to concentrate as other leaders delivered their remarks and was seen in his seat with earphones on which were connected to a laptop which was playing Saving Private Ryan.

“Well, this is awkward” Angela Merkel said as the first mention of the ‘evils of Nazi Germany’ was mentioned in speeches.

“Abso-fucking-lutely lov-a-ly fuckin’ day isn’t it gents?” an upbeat Theresa May was heard shouting as she approached a crowd of leading dignitaries with a glass of G&T in her hand, the weight of world clearly absent from her shoulders for the first time in months as she looks forward to formally resigning tomorrow, packing it in and leaving Brexit behind.

Trump later laid a wreath at the site of where his father would have died had he too not endured the pain of bones spurs, which meant he was ineligible to fight in WWII.

“Stop bringing up the whole Bengal famine shit when I mention Churchill, you’re such a killjoy,” Theresa May, admonishing a chatty veteran.

“We stand on the site where 12,000 allied soldiers died in their bid to liberate Europe. This peace is an enduring gift, a message that war and militaries should never be resorted to again…which is why I think we should all get the gang together in a great big super EU army,” French President Emmanuel Macron said, delivering a moving address.

“There is a palpable excitement in the air” – Sky News’s Kay Burley spoke of how great it would be to get one of the veterans passing away live on camera.

“If we could do it all again, we’d let it fall to the Nazis you blithering, ungrateful pricks” – stirring words from one D-Day veteran who said he’d shit out his colon if he had to look at Trump or May for one second longer.