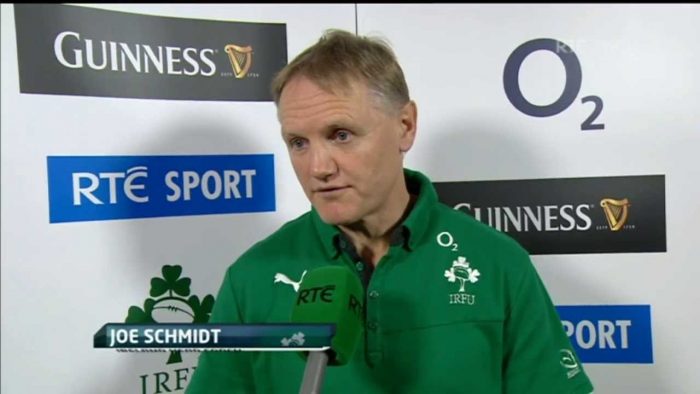 AFTER a disappointing 6 Nations campaign Ireland coach Joe Schmidt will have to go back to the drawing board and come up with a new game plan ahead of the 2019 World Cup in Japan later this year.

WWN Sport is on hand to examine just what went wrong and how to turn things around, and unlike the critics who have just come out of the woodwork to stab Joe in the back, we’ve had it in for the most successful Irish side ever from the very beginning so we know where it has gone wrong, and how to fix it:

Twitter user @Numbnuts74 didn’t hold back when he laid into the team that lost to Wales, and some of his insightful commentary could prove vital to Schmidt as he looks to turn things around.

There could be a small issue with @Numnuts74’s advice as the IRFU’s budget might not stretch to bringing him on full-time as part of the coaching staff and could face a bidding war with New Zealand, England and South Africa for his services but getting him on board could be the first vital change.

The lads in the pub always say it. The breakdown? Does Schmidt need to look at it? The breakdown that is. The rugby term we’re entirely confident of bandying about and certainly know exactly what it is, and why it is important. Has the abysmal Schmidt considered ‘the breakdown’ in all of this? Has he considered breaking up rather than down? Questions are being asked of him, and he needs to turn this around.

3) Give people a reason to get pissed again

Ireland have been so out of form of late that people who like to go to pubs and be seen in green when Ireland are winning might not half-watch the match out of the corner of their eye anymore. This needs to be changed somehow during the summer, or else Ireland face turning things around and performing well, but without any hangers on who have no real interest in rugby, and that would be a travesty.

This is the sort of ‘tough love’ tactical analysis WWN Sport never shies away from and we’re almost certain playing worse isn’t the right option.

Let’s face it, our rugby heroes are modern day superheroes and no one in their right mind thinks about switching bank until they know which of Ireland’s players is a branch ambassador. Same goes for buying cars.

Did it all go wrong for Ireland this 6 Nations because some of the squad took their eye of the ball and didn’t strike a partnership with a leading business that saw them being handed a vague sounding ‘consultant’ title?