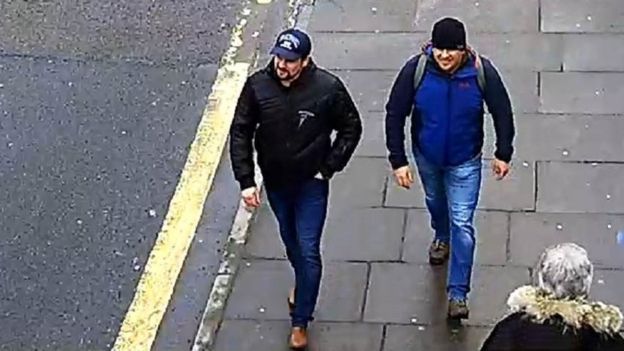 MANY of our readers are big fans of viral news stories and that is especially true of those stories involving intrepid travelers trotting across the globe in search of epic tourist photos or as is often the case a tale of some bumbling idiot making a big faux pas while holidaying abroad.

One such big viral travel story involves Alexander Petrov and Ruslan Boshirov, an average everyday couple from Russia, who were enjoying a romantic getaway in England only to find themselves subsequently the subject of some gas stories altogether.

Petrov and Boshirov, two men in the sort of loving relationship the Russian government is perfectly okay with, have only gone and been accused of poisoning people as part of Vladimir Putin sanctioned attack on foreign soil. could happen to anyone.

“Oh God, look at the state of me in that photo, I look so chubby,” Petrov stated when WWN showed him just some of still CCTV images which have made the news.

“Stop, you look so handsome. We were just trying to enjoy some long romantic walks in Salisbury parks and homes, and then months later all this fuss happens,” confirmed Boshirov, cradling his partner in a perfectly relaxed and not in any way staged manner.

Responding to accusations that they were in fact Russian operatives who poisoned several people, killing one, the couple were straightforward and clear.

“Nothing is ever Russia’s fault. Russia is unique as a country that way, it never does anything it’s accused of, unlike say America or the UK,” explained Petrov.

Responding to additional claims that they left the seat down in their hotel, pissed all over the seat and failed to clean it up, the couple were again candid.

“Nothing is ever Russia’s fault. Russia is unique as a country that way, it never does anything it’s accused of, unlike say America or the UK,” explained Petrov.

There’s been a big response to this viral story, with some people now claiming the couple didn’t even go on holiday in the first place.