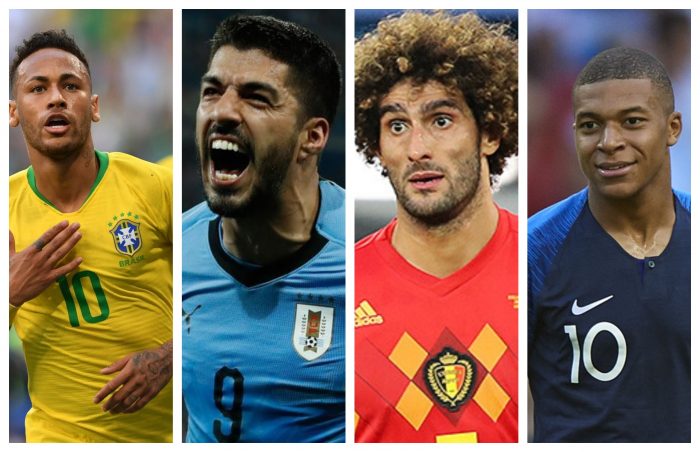 We size up today’s 3pm and 7pm kick offs and speculate on how it will all play out.

To combat players crowding the referee like a pack of wild dogs, FIFA have proposed a ticketed system which would allow players to berate the referee and call him a cunt but only after their numbered ticket has been called.

Aimless French coach Didier Deschamps has told his critics not to worry about his apparent complete lack of tactics, claiming he has finally written down ‘pass to Mbappe’ on the back of his hand in pen.

If Uruguay completely shit the bed just like Argentina did then there’s every chance these tactics could work.

The addition of a new VAR team which will review the original VAR team’s real time decisions has been greenlit by FIFA. While some have welcomed the decision, others are confused by the Inception-like nature of the convoluted process.

With Cavani a doubt for the Uruguayans a lot rests on the shoulders of Luis Suarez as he will have a choice whether to become ruthless in front of goal or act the prick and get someone sent off. Paddy Power have already paid out on the latter happening.

Scientists have finally confirmed that if Paul Pogba unveils a new haircut for the match today it will have fuck all effect on whether he plays well or not, or is a good player.

Uruguay beat France 5-1 in 1924, will this match played 94 years ago affect today’s game in any way? No, it’s unlikely as only 4 of Uruguay’s starting line up played in that fixture.

Those stuck in work for this match have been reminded you can catch the game on the RTÉ Player or for a better view of the game you can listen on radio and hand draw the action yourself.

Brazilian coach Tite confirmed Neymar will be kept in a shatter proof protective box right up until just before kick off.

Neymar, a deeply religious man, much like many of his teammates has already dedicated his first 10 dives of the game to Jesus.

After complaints from previous opponents Roberto Firmino will have to wear a gum shield to protect players from the searing shine of his teeth which have blinded three players so far this tournament.

Belgium have been urged by authorities to formally register Marouane Fellaini’s elbows as lethal weapons.

Belgium manager Martinez was minutes away from being completely humiliated by Japan in the previous round, in a bid to make sure this doesn’t happen against Brazil the coach confirmed he looked the word ‘defending’ in the dictionary.

Injury prone Vincent Kompany has had his legs replaced with robotic ones to combat the possibility that his legs would whither and die at the prospect of playing so many games in quick succession.

It is hoped both games will be a free flowing end-to-end games full of skill and excitement, however, some football fans have admitted they just want it all to go to shit with a few red cards and the odd brawl or two.

Both of today’s games come with an official shithousery rating of 3 out of 5 shithouses. The highest in the tournament so far was the 5 out of 5 rating issued for Uruguay’s earlier clash with Portugal.