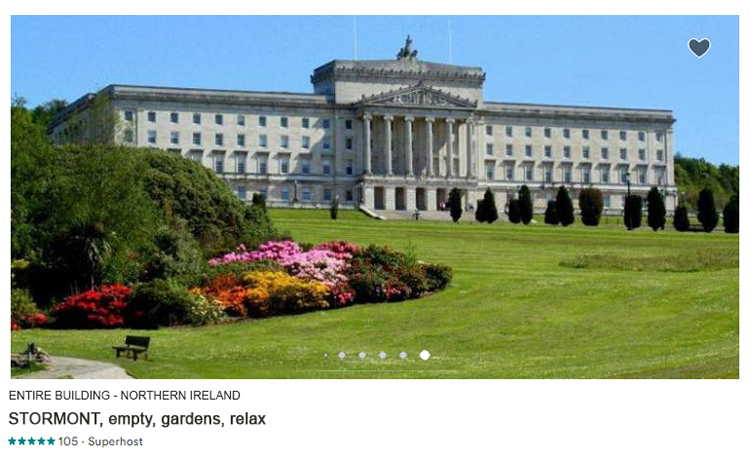 KEEN to avoid any accusations that they’re wasting public resources, the remaining shards of the Northern Assembly have put a number of rooms in Stormont up on accommodation-sharing website Airbnb, in a bid to ‘make a few quid’.

With the vast majority of the rooms in the east Belfast castle lying idle since the collapse of the power-sharing executive last year, MLAs from both sides of the political divide came together to create a system in which the money made from letting out rooms in the ‘spacious, well-furbished castle, only minutes away from the heart of lively Belfast’ to Swedish tourists looking for cheap, short-notice accommodation will be shared evenly.

With interest in the rooms already racking up on the Airbnb website, the DUP and Sinn Féin have borrowed a number of vans for a trip to Ikea, to kit out rooms once used for squabbling with bunk beds and wardrobes and maybe a few little cushions and things, just to make the place look more cosy.

“We’re not going to let Stormont Castle become Dormant Castle,” read a joint statement from the DUP and Sinn Féin, the only joint letter written by the parties in over 13 months.

“We may have managed to turn a series of seemingly surmountable political challenges into an insurmountable, country-ruining mess, but that doesn’t mean we can’t squeeze a few pound out of the thousands of tourists that flock in and out of Belfast every week. We don’t even need to cook for them or anything, just make sure there’s clean beds and plenty of toilet paper. And we’ve got that covered, sure what else were we going to do with all these copies of the Good Friday Agreement?”

Ministerial drivers, still on full government pay for carrying ministers to Stormont to do nothing, have announced that they too will ‘get in on the tourism action’ by signing themselves up for Uber.