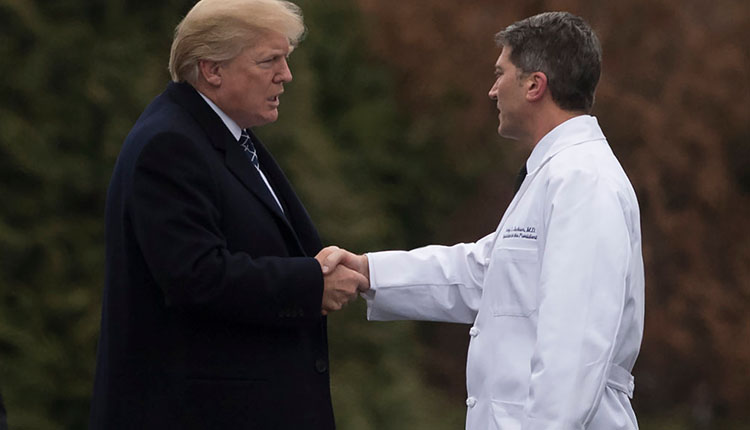 THE doctor who performed President Donald Trump’s latest medical examination has been called back to the stand, completely of his own free will, to add some remarks about the impressive size of POTUS’s penis.

White House doctor Ronny Jackson, who yesterday confirmed that Trump is as tall and as beefy as Dwayne ‘The Rock’ Johnson, called a second press conference today to fill in some parts of the medical assessment that he missed the first time round, mostly about Trump’s impressive manhood and his off-the-charts sperm count.

“Mr. Trump has a penis that would be the envy of any man alive,” said Dr. Jackson, his eyes seemingly reddened by tears.

“In all my years as a medical practitioner, I have never seen a penis such as this. The length, the girth, the ridges of thick veins running up and down the shaft… truly, it is a penis that is built for one purpose and one purpose only, and that purpose is giving women orgasm after orgasm”.

Dr. Jackson paused at this moment, until a White House staff member handed him an envelope containing a photo of the doctor’s family, along with what appeared to be several bullets.

“That’s 10 inches long, while flaccid. God only knows how big it grows when erect. This thing is easily the biggest penis a president has ever had. Also, when we had finished with our medical assessment, Mr. President took me on at basketball in a one-on-one game, and even though I am younger than President Trump by many, many years, he still kicked my ass on the court”.

Although many have cast doubts over whether or not the president’s penis is in fact that large, they all agreed to go along with it so that Trump doesn’t get angry and nuke the world.