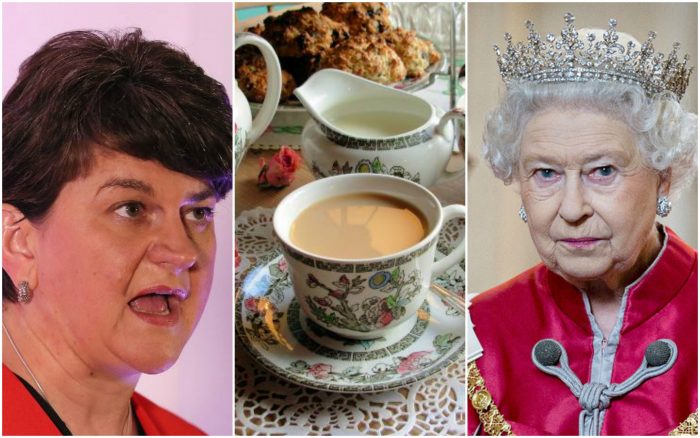 BREXIT negotiations can now progress to the next phase after Theresa May conceded to Arlene Foster and the DUP by offering them tea with the Queen in exchange for a soft border between Ireland and Northern Ireland, WWN can reveal.

The breakthrough in border talks preserves the terms of the Good Friday Agreement and came earlier this morning with all sides including Britain, Ireland and the EU hailing what many view as the first positive step in negotiations.

“We were clear in our discussions with the DUP. They will be no touching allowed,” May explained of tea with the Queen.

The Queen acquiesced to May’s plea for help as the monarch confirmed she will tolerate the presence of ‘inconvenient, potato addicted Irish’ who are ‘operating under the misapprehension we actually give a shit about them’.

“They can fuck off if they think we’re using the good China. Get that stuff one bought in Ikea the other week,” the Queen is believed to have said to one of her many staff.

In keeping with the DUP’s requests, there will be no biscuits served with tea as sugar and happiness are considered sins.

Experts pouring over the wording of the border agreement have agreed with the assessment of some members of the British public who observed “we’re basically paying €100 billion to stay in the EU, aren’t we?’ before burying their heads in their hands.