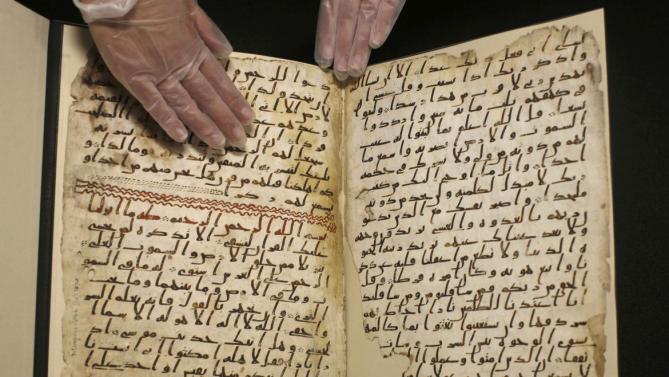 EXPERTS researching an old manuscript of the Koran that was found buried away in a Birmingham library said they still haven’t found the bit about beheading infidels and raping young girls.

Scholars have claimed that the ancient artefact could prove that such acts may not be Islamic and that recent atrocities carried out by groups such as ISIS and the Taliban may actually be illegal under the good book’s law.

“We’ve been here for weeks searching this beautiful manuscript and there is nothing in any of the scripts relating to harming other people, regardless of their beliefs,” said Professor of Christianity and Islam, David Thomas, of the University of Birmingham. “In fact, the only thing close to it is in passage 5:33, it reads: ‘the taking of one innocent life is like taking all of Mankind… and the saving of one life is like saving all of Mankind’. Which is totally contradictory to what is being done in many Middle East countries.”

Recent carbon dating revealed last month that the script etched on animal skin was at least 1,370 years old, potentially making it the oldest partial copy of the Koran in the world.

“Yeah, it would be safe to say this copy would be as close to the original as possible so I don’t know where they’re getting the beheadings and raping bit from,” concluded Prof. Thomas. “It’s like someone just made it up to benefit their own thirst for greed and violence; much like the Vatican did over the years, but not as bad. No one is that bad”.