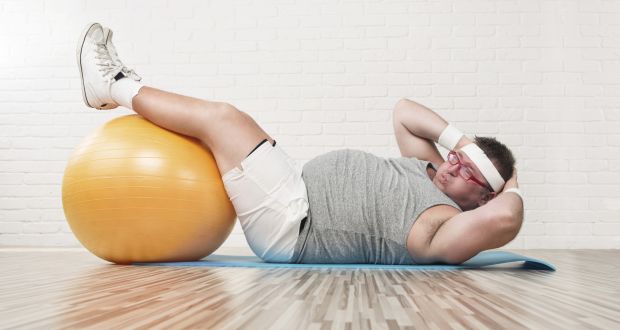 DUBLIN man Niall Kearns had thrown himself with great enthusiasm into a rigorous exercise regime for as many as 4 minutes before quitting spectacularly, WWN has learned.

While there were no eyewitnesses to the 4 minutes of exercising, Niall reassured friends it had been ‘full on’ and ‘intense’, spending as much as an hour detailing the various problem impeding his achievement of killer abs.

“Listen, I can tell now I went to hell and back in those 4 minutes,” explained Niall to friends, “but I feel I got the benefit of it, look at my left arm there, the definition.”

“It was somewhere between placing myself on the exercise mat and completing the 5th push up that I knew something was wrong,” shared brave Niall, who has struggled with paralysing laziness his whole life.

“I felt this tightness around my abdomen and thought I better stop to be on the safe side,” Niall explained.

Niall, who’s ‘cheat day’ began with his birth and has continued throughout his life, remained upbeat but ultimately sceptical of certain exercise routines.

“What are killer abs anyway, why would abs have homicidal urges? See, this is why I just don’t trust these workouts, I know my own body the best,” added Niall who’s body will take him by complete in 2027, by giving up completely and killing him.