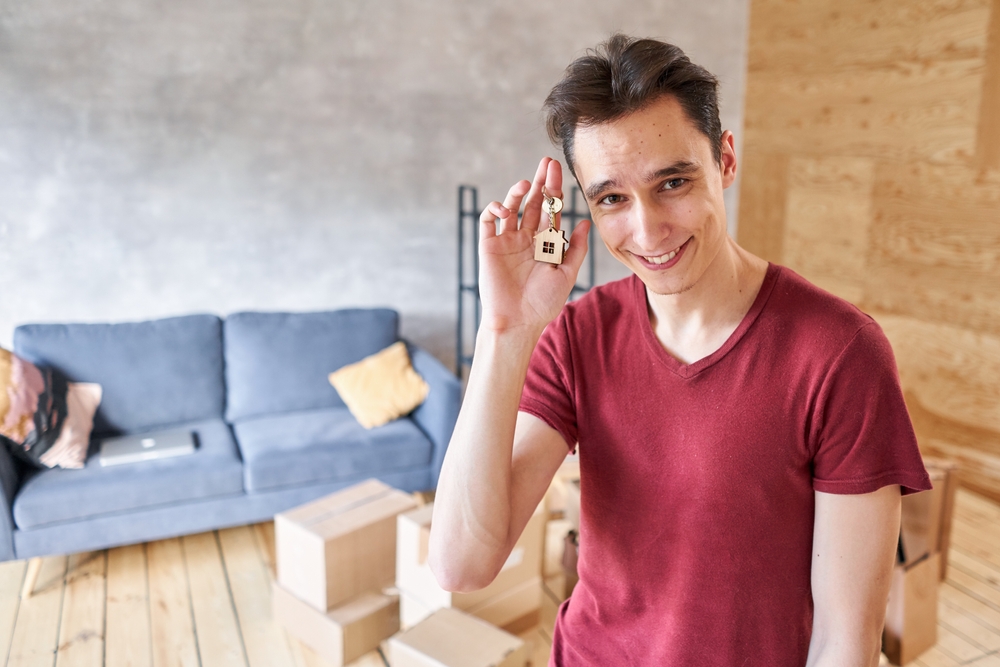 IF it’s one thing that people struggling to get their foot on the bottom rung of the property ladder like to read, it’s another newspaper article centered around a young person who has just bought the home of their dreams with absolutely no help from anyone.

No help aside from an immense inheritance, well-to-do parents providing a deposit or just buying a house outright for them.

Today’s subject is a 26-year-old Waterford man who has lived in a 2-bedroom apartment of his own since last year without help from anyone at all.

“It was four years ago, I was in Waterford IT but still living at home the other side of town, and I remember thinking God, it’d be so much easier if I just had a place of my own, so I could go on the proper tear whenever I wanted without the aul lassie giving me shit all the time,” remembers Conall Mulhearn, sitting in the window of his apartment, looking out over the city.

“Nine of the lads in my course were all living in the one two-bedroom house on the QT paying cash to the landlord off the books, a pure zoo but they didn’t mind because they were on the lash five nights a week.

“Meanwhile I’m still at home, getting the odd quiet ride here and there but did you ever get the ride without moving at all? It’s not it, let me tell you. So, I’d always be on at the lads to let me move in with them, but they’d say no, nine in the one gaff is pushing it as is. Bad and all as their landlord was, he had a limit to how many 20-year-olds he’d ram into the one place. And there was no way I could afford a place of my own, not even the rent. So, it was looking bleak”.

With only the income from his part-time job stacking shelves at Tesco to keep him in cans, Mulhearn’s prospects of owning property before he was 40 looked grim until fate smiled happily on him one day.

“I was on the way home from work and cut through this industrial estate that’s a bit of a shortcut, you wouldn’t go through it at night usually, but I was in a rush to get home. I passed a parked car that was on its own, and that’s when I noticed there were holes in the side window,” explains the 26-year-old, as he shows us around the spacious open-floor area that serves as a kitchen/dining room, ideal for entertaining guests, which leads on to the living area.

“Two lads inside, one in the passenger side, one in the driver side. Bullet to the side of the head apiece, you could clearly see they’d drawn guns on each other and pulled the trigger at the same time. ‘Deal gone wrong’ shit for sure, and in the back was the reason. A hold-all of grass and a hold-all of cash. 300 grand, just sitting there. So, I did what anyone looking to get on the property ladder would do. I took the bag and put a match to the car. The lad in the passenger side wasn’t all the way dead yet, he had enough in him to turn his eye and watch me the whole time.

“As the flames leapt up, you could see the look in his face turn to one of acceptance, as if to say, ‘yeah kid it’s hard out there, I can’t blame you’. I’d love to say that the image haunts me to this day, but in actual fact I’ve never given it a second thought”.

“The days afterward seemed like a dream. The cops came along and called it as they saw it; drug dealers ran afoul of someone, gangland execution, car burned out, no mention of money. Meanwhile I had the price of this apartment sitting in an Adidas bag in my wardrobe at home. I was smart enough to know I couldn’t spend it straight away, but I was still ’22 enough’ to make some stupid decisions.

“I found an estate agent that was willing to let me but a 220k apartment for 300k cash, and sort everything out in my name, no questions asked. There’s still a few of them around if you don’t mind paying them the extra, although if I were to be an honest buyer, I’d probably have still paid 80k over asking anyways hahaha. I told my mam and dad that I’d rented the place and moved in a month later. They think it’s a bit bigger than I should be able to afford, but they don’t really know any better because they bought their house on a single salary in 1981 and haven’t really followed the property market since”.

Walking us through the two-bedroom apartment, the spare room is currently let out to six Brazilian workers employed nearby, a handy supply of weekly cash that Connall claims he ‘may as well’ collect, we’re enthralled by our host’s tale, although he adds that ‘nothing is free’ in this life.

“The drug gang found me, of course, they always do,” laughs Conall, as bright sunshine beamed through the floor-to-ceiling windows.

“Estate agent gave me up straight away after they interrogated him about anyone making large cash purchases in the weeks after the deal went wrong. So now, I work for them, and have done so for years. Otherwise, they say they’ll kill my mam and dad, kill me, or worse – burn this place down and put me right back into the rental market.

“They made me shoot a man on his doorstep last week, one in each leg as his wife screamed from inside. I just had to bury it deep inside and remind myself – you’re a homeowner now, just be thankful of that. Whatever else happens, whatever else your life becomes, you own your house. There’s a lot of people who would gladly swap places with you”.

Next week, we ask the question: are evil spirits real? We’re talking to a family of four who just moved into a three-bedroom semi built on a famine graveyard who hope the answer is no!