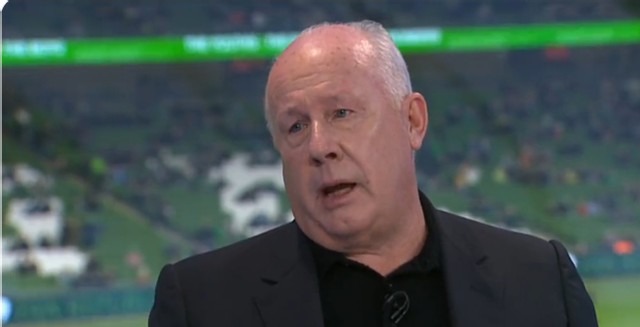 COMMENTING on Ireland’s 0-0 draw with Portugal, RTÉ panelist Liam Brady remained unconvinced by the performance and insisted there were only negatives to take from Stephen Kenny’s output when you take away all the positives.

“Hang on Darragh I’d say the jury is very much still out on this whole taking pleasure from being alive stuff, conversing with friends and loved ones, experiencing joy. This Portugal team only had Patricio, Ronaldo, Fernandes, Felix, Moutinho, Silva and Pepe,” confirmed Brady, who carried a picture of Giovanni Trapattoni in a heart shaped locket dangling from his neck.

“I’d like another look at clip Darragh if we can. Roll it on – yes, I can see it’s a bucket of labrador puppies with butterflies perched on their noses but let’s not kid ourselves here, that hasn’t done anything to lift the mood,” continued Brady.

“This is easily the worst century on record. I actually think trying to win a match when the world is grappling with climate change is a terrible look,” added Brady before alerting RTÉ to the fact that his co-panelist Richie Sadlier had pocketed a free pen provided by the broadcaster for note-taking purposes.

Further pressed on why it would be foolish to get excited about outplaying the 5th ranked team in the world for much of the game while fielding players plying their trade with Portsmouth, Rotherham and St Mirren, the footballing great didn’t hold back.

“That was more depressing than if Radiohead did the soundtrack for Schindler’s List,” Brady confirmed, while also admitting he tried laughter once and found the whole thing overrated.