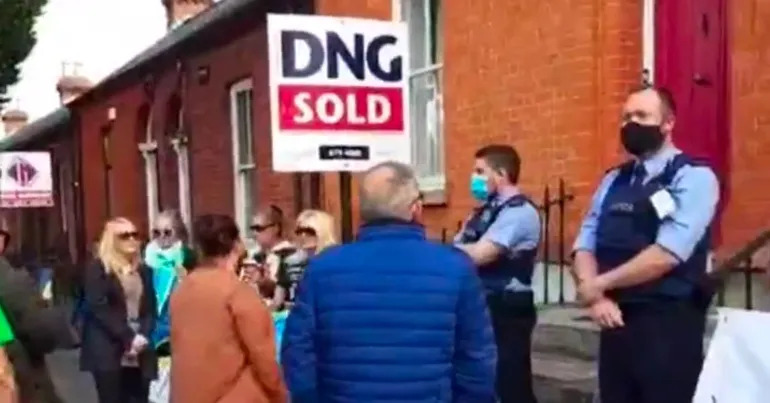 AN anti-vax, anti-mask, anti-lockdown, anti-abortion, anti-lefty bullshit protest group has gathered in Dublin today, around about the same time they normally do, shouting the same stuff, attracting roughly the same number of like-minded loopers as per usual.

Eleven or so people, up from yesterday’s 8 or 9, formed a circle across from the Dáil and muttered to themselves about who’s house they should march past next, all while live-streaming themselves to nobody watching on Facebook.

Declaring themselves heroes of the people, the group then decided that they should protest at the home of a TD that lives in Dublin city centre, after initial plans to protest outside Simon Harris’ house were scrapped as nobody really felt like getting the Dart to Greystones at this hour.

“It’s always amazing how they don’t seem to grow their numbers whatsoever, just the same dozen doses over and over” laughed one member of the Dáil security team, eating a biscuit while the patriots across the street unfurled an Ivory Coast flag.

“When all this lockdown craic started last year, we were sure that there would be a substantial, prolonged period of hassle from thousands of angry protestors. And there’s been a few rallies here and there, don’t get me wrong, but the rest of the time it’s these head the balls loitering outside Joe Duffy’s house for an hour or something like that. In fairness, look at the state of them. Would you be seen with a crowd like that?”.

Regardless of the ragtag nature of the ‘last 12 patriots in Ireland’, the government is to rush through legislation permitting the use of lethal force if they attempt to come within a hundred yards of a TD’s home.