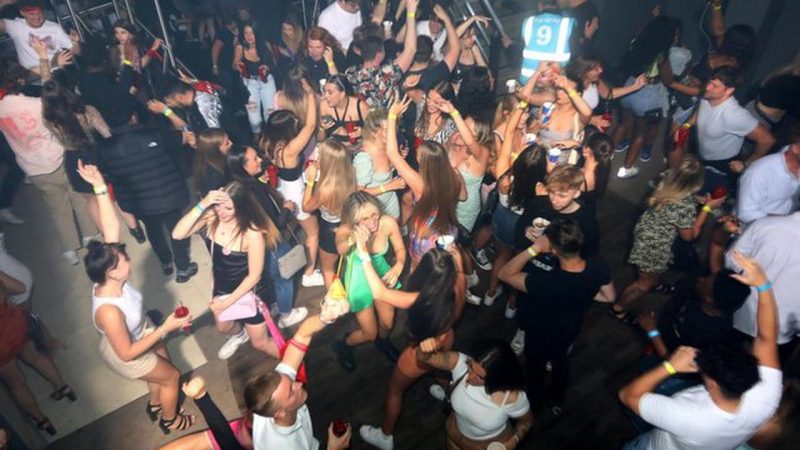 WHILE the change to restrictions remains a muddled incoherent mess which keeps the 30,000 people employed in the entertainment industry on the edge of constant breakdown, one bright spot to emerge is the news that nightclubs will be back open from the 22nd of October.

As the Taoiseach said yesterday ‘what traditionally happens in a nightclub will happen in a nightclub’ but with everyone rusty after 18 months out of the nightclub game what exactly is that? WWN has prepared this essential survival guide:

– Don’t worry, the familiar reassuring presence of horrible sticky carpets and floors will be there. Staff have been hard at work pre-sticking them. With spilled drink, blood, or vomit? Who knows but guessing is half the fun!

– After plaguing you to go a club, that one friend will spend most of the night in the smoking area.

– New measure; reconnaissance scouts looking for someone to shift their friend must show friends vaccine certs.

– Do not intervene if you witness a DJ being bullied into playing Ed Sheeran’s ‘Bad Habits’ for a 7th time in the one night. This is the kind of thing DJs have missed, honestly.

– Refamiliarise yourself with all the ‘okes’.

1) Blokes – lots of them, on the edge of the dancefloor, downing pint after pint petrified of dancing as the weight of their inability to process their emotions crushes them until someone says ’round of shots?’

2) Yokes – €5, not a cent more, you’ve been through enough this last 18 months only to be price gouged now.

3) Coke – it’s only a line, don’t be a dry shite. Maintain at least 1 metre when queueing for the cubicle for a snort.

4) Chokehold – the bouncer’s favourite. Know your rights tough; bouncers legally have to be wearing facemasks as they fuck you out the front door.

5) Stroke – please remember; this isn’t Zoom any more. People can see if you put your hand down your trousers.

6) Broke – fuck me, nights out are expensive. Pre-drinks with the gang? €8. Attempting to get shitfaced on watered down spirits from a nightclub bar? €80. On a separate note; it is now politically incorrect to ask for a fat frog, it’s now called a plus size frog.

7) Jokes – for female nightclub goers, the toilet is where the jokes flow, and intense and deep friendships are forged over 10 seconds. Making mortal enemies is also an option.

8) Provoke – maladjusted men fighting outside after closing time must sanitise fists between punches. Women falling out with best friends and choosing to cry on steps outside club must wipe down said steps when leaving.