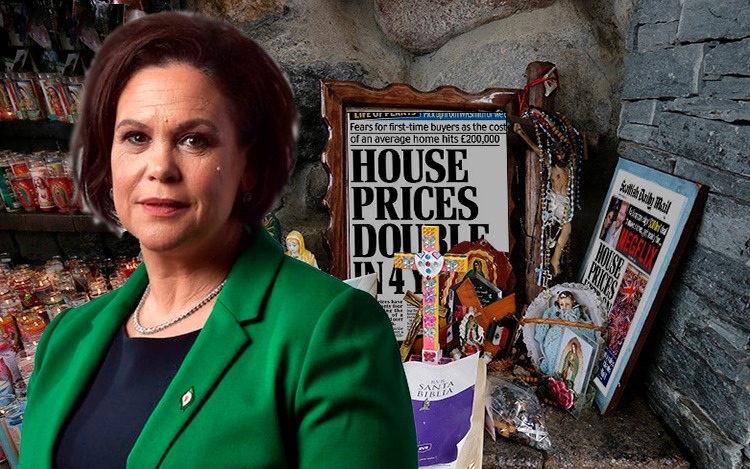 SINN FÉIN have finished construction of a massive shrine to the housing crisis after the party carved out a 10-point lead in the latest opinion poll.

The construction represents the only building the party’s local councillors haven’t voted against in recent years, and is seen as a tribute to just one of 151 ongoing crises in the country that has the government parties hemorrhaging support.

“We couldn’t better this poll even if Mary Lou was building €10 affordable housing with her bare hands,” confirmed a Sinn Féin spokesperson, who had no idea his quote would be used by the Irish Independent to accuse McDonald of having terrifying and intimidating bear hands.

“Obviously when another story appears of landlords illegally raising rent or a dog kennel in Dublin being sold for 300k we’re all ‘bold, bad government!’ on the outside but on the inside we’re doing fucking cartwheels as that’s another easy 5 point bump in the next poll,” shared a Sinn Féin spokesperson.

Perilously close to cracking a smile, party leader Mary Lou McDonald wondered if she was tempting fate by printing off 40,000 ‘Sí-seach’ t-shirt for sale at Sinn Féin HQ.

“No,” Gerry Adams was told by his party when he asked if such a commanding lead in the polls meant he could come out from the shed he’s hidden in.

Elsewhere, the beleaguered coalition government have reacted to the poll by stating “we deserve credit for their rise in support, they couldn’t have done it with our lack of leadership and daily quota of stupidity”.