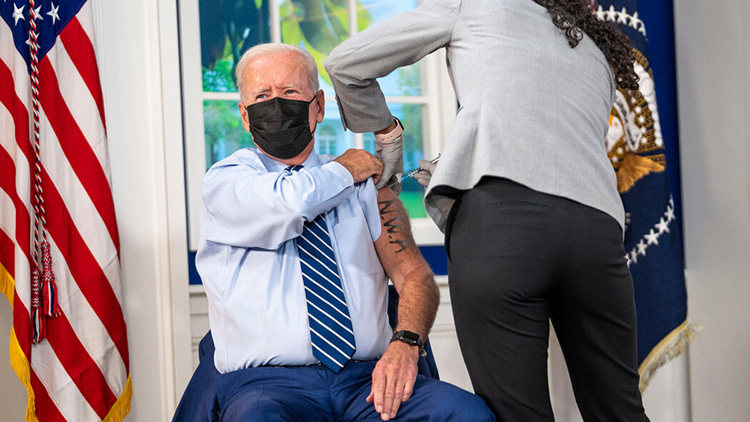 PRESIDENT Joe Biden has received a Covid-19 booster shot today, with White House staff admitting that they were surprised at the tapestry of tattoos that was revealed when the 78-year old rolled up his sleeve.

“Definitely didn’t have him down as a fan of 1980 gangster rap pioneers N.W.A” admitting Nurse June Bakefield, who said she had to bite her lip when giving Biden a jab in his bicep, right through the forehead of group member Ice Cube.

“But President Biden opened up about how he loved the group back when he was just the tender age of 44. ‘I used to bump that shit all the time’, he told me”.

As Biden broke into an ill-advised rendition of N.W.A.’s timeless classic Fuck Tha Police, more pharmaceutical companies announced that they too would be releasing booster shots for their vaccines, in a bid to ensure people are as safe as possible, among other things.

“Yes, our vaccine is very efficient at diminishing the symptoms of Covid-19. But wouldn’t you like if it was just a wee bit more efficient?” asked one pharma boss we spoke to.

“Just think of boosters as being like FIFA on the PlayStation, there’s a new one every 12 months for your entire life. What changes from year to year? Very little, but do you want to be the one kid without FIFA? Of course not. So the booster shots are just like that, except with you not dying”.

Meanwhile President Biden has complained that even though he’s had three vaccinations, he still can’t get 5G reception on his damn phone.