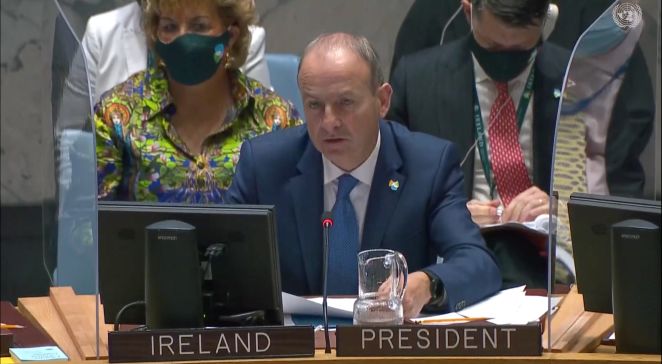 A HISTORIC first as Ireland presided over a meeting of the UN Security Council which took place earlier today, during which Taoiseach Micheál Martin spoke forcefully on the pressing security issues facing the world presently.

WWN has republished some extracts and highlights from the Taoiseach’s remarks below:

“First off, may I say if anyone has any spare tickets going for that Hamilton musical on Broadway let me know, preferably not a matinee performance as they always feel a bit lacking in energy, thanks” – the Taoiseach, officially opening the UN Security Council meeting.

“Sorry now lads, I’ll be back in 5, just have to pay for the parking only had it up to 2pm, but you lot love to talk and talk” – the Taoiseach interrupting a particularly intense exchange between the Russian and US representatives on the role of the UN in tackling climate change.

“Climate Change and global instability is obviously a major issue but at home in Ireland it’s kind of worked out for us, Cork is basically the Venice of western Europe, you should really consider visiting. Now if it you’d just under your seats… that’s right, it’s a Cork tourist brochure!”

“The Council can and must do more. It has the mandate and it has the tools… what are we doing back home? No, no, we sort of let the farmers do whatever and we’re handing out planning permission for Data centres like they’re wafers during communion but like, the UN should do more yeah”.

“Ah now c’mon lads, even you Antonio Guterres? Were we not just in the lobby for 10 minutes talking about Cork? Feck sake” – Martin losing his temper after being called Leo for the 15th time.

“Ireland is obviously humbled to be on the Security Council and looking forward to being idly complicit in some unspeakably tame and timid admonishing of war crimes, and tacit support for others”.

“I’m being plagued by TDs back home to bring them back a nice surprise, the WhatsApp is hopping honestly, but you’ve not much in the UN gift shop apart from a few Kofi Annan action figures. You couldn’t do me up a few fridge magnets? It’s just I don’t want to get caught with excess baggage charges on the return flight”.

“Sorry, I know I’m going off on a tangent again, but does anyone know the name of the shop Tom Hanks does the dancing on the piano at in Big? FAO Schwarz is it? Aw, it closed? You’re joking me. That’s basically the only reason I came over here in all truth.”

“Antonio, you wouldn’t take a pic of me in front of this ‘Ireland President’ sign, Michael D will fucking flip when I send this to him”.