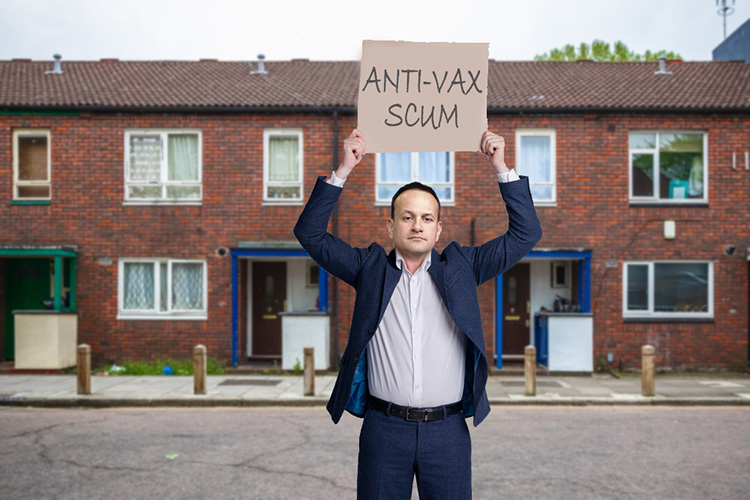 TAINISTE Leo Varadkar has been both commended and criticised in equal measures after staging a one-man demonstration outside the homes of the anti-vax protestors who were outside his house at the weekend.

Having learned the names and addresses of the dozen or so ‘patriots’ who posted videos on social media of themselves waving banners and shouting slurs outside his home, Varadkar took the time out of his busy nose-picking, festival attending schedule to create banners about his tormentors that carried about as much truth or logic as the ones displayed outside his own front door the day before.

“He was holding one banner that read ‘antivax scum’,” an eyewitness told WWN, after watching the furious Táiniste dole out some retribution.

“I’m not sure I agree with showing up at somebody’s home to protest, but if they rocked up to Leo’s gaff then I suppose it’s only fair that he arrives at theirs. I’m not sure I agree with the very unparliamentary language he’s used on some of his placards, but at least his description of these headcases seems to be accurate, and it’s nice to see that the government is finally getting value out of the Dáil printer too”.

Varadkar’s unprecedented move has opened the floodgates to others to ‘bring it to the bastards’, resulting in TDs, CEOs and public figures letting their respective trolls and critics ‘have it’.

Minister For Housing Darragh O’Brien was spotted outside the home of a Donegal mica claimant chanting ‘80% redress will do you fucking rightly’ slogans, while Sinn Fein’s Mary Lou McDonald has been trapped in her home for the entire morning by 12 to 14 angry vulture fund directors.