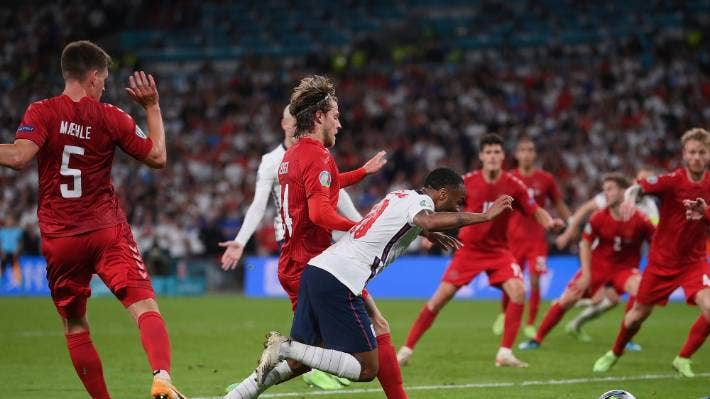 WWN regrets to inform you that you must begin making preparations to live the rest of your life underground in a bunker sealed away from humanity in the event of the unthinkable, now that it is no longer unthinkable.

We could wax lyrical about Damsgaard’s divine free kick, mock Jordan Pickford who looked more jittery than a coffee addict operating a jackhammer on top of a washing machine or mention the classy booing of the Danish anthem.

We could even share our admiration for Thomas Delaney, like any good Delaney, spending his energy like it was an FAI expense account credit card, or point out that during the game Kane went down more times than the blow job section of the world’s leading adult website.

However, the match will be remembered for an incident steeped in controversy. Not Kjaer’s own goal, which now makes Owen Goal such a prolific striker it is favourite to replace Kane at Spurs if he moves to Man City.

No, human brick wall with octopus tentacles for arms Kasper Schmeichel tried his best to keep Denmark level but in extra time Sterling was mercilessly hacked down and a penalty awarded.

UPDATE: wait, it was a blatant dive and VAR urged the referee to rule it out after seeing the replay.

UPDATE: no they didn’t.

Sterling crashed to the floor quicker than people making the joke about how last time Sterling dived like this it was the morning after Brexit. Similarly, like English politicians the morning following that, Sterling proceeded to lie in interviews about how it never happened.

UPDATE: wait, it turns out there was a second ball on the pitch at the same time.

Cheered on for diving makes a change for Sterling who is usually booed by fans when he takes a knee. Thankfully this acceptance that it’s ok to cheat means no English fans will criticise any Italian ‘gamesmanship’ in the final on Sunday.

UPDATE: someone shone a fucking laser in Schmeichel’s eye as the penalty was being taken.

Despite this Kane didn’t couldn’t convert the penalty, instead scoring the winner with a follow up strike.

Famed for their derision and vilification of diving foreigners, English pundits have said the game should be replayed as winning through cheating is just not the English way.

UPDATE: if an Irish player did that Irish fans wouldn’t be happy at all and would refuse to celebrate such a hollow victory.

Elsewhere, incensed by the injustice of it all over on RTÉ Didi Hamann has joined the RA.