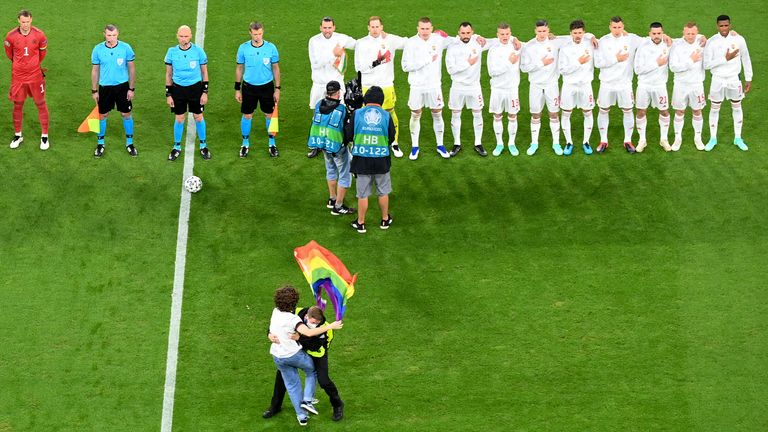 A BITTERLY disappointing batch of games only saw 18 goals across 4 games. In truth, the day’s action saw more up and downs than an afternoon on the rollercoasters at Universal Studios Orlando.

The pre-game diplomatic row involving Hungary’s government added spice to the Germany game. However, Hungary’s homophobic authoritarian leader, Viktor Orban, decided against attending the game amid backlash to his anti-LGBT laws, and after he realised the match wasn’t being played in Munich in 1939.

In contrast to their politicians, the Hungarian players acquitted themselves well on the European stage and earned everyone’s respect with a performance which pushed Germany right to the wire.

Before a ball was kicked a man ran on the pitch carrying the rainbow flag, it is believed the fast acting security guards still haven’t caught up to him. Heartwarming displays of support for LGBTQ people were taken a step further once Hungary scored with Germany calling for the country to be immediately kicked out of the tournament.

The Group F table was ever-changing with helter skelter action throughout, as over in the France Portugal game the referee took a pokemon approach to penalties, vowing to catch them all.

Hugo Lloris channeled his inner Mike Tyson to punch Diallo in the head with Ronaldo scoring the resulting penalty. France were awarded a penalty for Semedo’s attempted murder against Mbappe. However, replays showed there’s been more contact between humans and aliens species.

Benzema converted the penalty and added a second as the second half began. The action was so entertaining, breakneck and manic that football fans evolved to grow a second set of eyes to ensure they could watch both games at the same time.

Two goals in one minute in the Germany match saw keepers Gulacsi and Neuer take turns at being as error prone as the McDonald’s ice cream machine.

Ronaldo scored his 109th International goal with what felt like the 21st penalty of the evening, making him the joint record holder for most internationals goals with a player Ronaldo couldn’t give a shit about because it’s not him.

Goretzka scored Germany’s vital equaliser, breaking Hungarian hearts but made a heart shape sign in his celebration, which solved everything.

Knowing the 2-2 result in Germany was final, France and Portugal both knew they were going through if their match stayed level so the final minutes were played out with the intensity of an over 50s 5-a-side the day after a mammoth drinking session.

Such was the heart-racing chaos of the evening kickoffs, the early kickoffs seems like a blur. Slovakia slovakuated their bowels against a Spanish side who put 5 goals past their opponents with the standout moment involving Slovakia keeper Dubravka scoring an own goal after flapping at a ball in the air with all the coordination of a hippo learning ballet.

Sweden advance to the next round as groups winners after a 3-2 win over Poland, ensuring TV camera men have very attractive woman in the crowd to leer at in the knockout stages.

Elsewhere, UEFA president Aleksander Ceferin has hired extra security after watching a video of an angry Damien Duff give his thoughts on how spineless and pathetic UEFA’s response was to Germany’s request to light their stadium in rainbow flag colours.

The last 16 ties are a quick Google away. What, do you expect us to do everything for you?