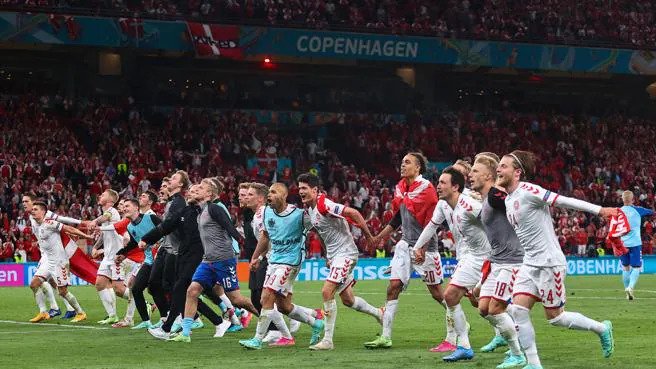 GROUP D’s games had more action in them than the latest Fast and the Furious movie. Happy to time waste and play for the draw that would secure their place in the next round Russia were as eager to enter the Danish half as Melania Trump is to share a bed with her husband.

Denmark broke the deadlock with a sensational strike from Daamsgaard, which on closer inspection of his technique in replays showed he ‘absolutely horsed it into the net’.

A minute of football with more twists in it than an M Night Shyamalan movie, Danish fans broke into wild celebrations after they got word of a Belgian goal only for their team to concede a penalty and VAR then canceling out Lukaku’s goal against Finland. Dzyuba, who missed his calling as Evil Henchman No. 4 in every Hollywood B movie, slotted home Russia’s penalty, making it 1-1.

As things stood Fugaku, the world’s most advanced computer, exploded as it tried to make sense of all permutations around which of the 3rd place teams could advance to the next round.

A horrendous attempt at a pass from defender Kuzyaev was delivered from Russia with love to set Poulsen up for a tap in, with keeper Safonov scrambling and looking as wrong footed as a vertigo-afflicted clown wearing a pair of ice skates on the wrong feet.

A screamer from Christensen soon followed for Denmark and then a final and 4th goal as Russia were dismantled like a pro-democracy protest in Moscow. It wasn’t all bad news for the last place Russians as Putin has rewarded their efforts with a team-bonding session in the Siberian wilderness.

Finland valiantly clung on onto a draw for 73 minutes against Belgium before conceding through the tournament’s most lethal strike Own Goal. Their ultimately futile defensive efforts which have left them with a nervous wait to see if they’ll advance to the next round only to lose again and return home as heroes has earned them the nickname of Nordic Ireland.

Earlier in group C with Ukraine’s defending poorer than an orphan in a Dickens novel Austria’s Baumgartner scored the only goal of the game using the time honoured football skill of a karate kick. For the majority of the first half Ukraine were sloppier than a drunk trying to eat Spaghetti while failing to retain some semblance of dignity.

Previously in the game Baumgartner suffered a clear head injury, and under strict UEFA safety protocols he was allowed to wander around aimlessly while not knowing his own name as the team doctor gave him four thumbs up.

Ukraine’s passing at times was as accurate as a blind assassin armed with a wooden gun and they never looked likely to score, prompting Andrei Shevchenko to say ‘fuck it, I’ll do myself’ as he tried to sub himself on.

Like an unsatisfied suburban housewife belatedly discovering exploring her sexuality with a new lover, North Macedonia were spanked by the Netherlands. A comfortable and classy 3-0 win, why oh why didn’t you back them at the start of the tournament?

The game marked the final international appearance of Goran Pandev, who left the field of play to a guard of honour on his way to an old folks home. North Macedonia’s exit now officially brings an end to football fan’s ‘is there a South Macedonia?’ questions.

Elsewhere, there were tears among football fans when they learned a positive Covid-19 test for Scotland’s Xavi Gilmour has ruled him out of his team’s game against Croatia and then there were tears of laughter when this led to Mason Mount and Ben Chilwell having to self-isolate.

UEFA have refused Germany’s permission to light their stadium in the rainbow colours of Pride in a message of defiance to the unrepentant homophobia Hungary has displayed.

“Homophobia is cool with us, just don’t move the Coke bottles,” UEFA confirmed.