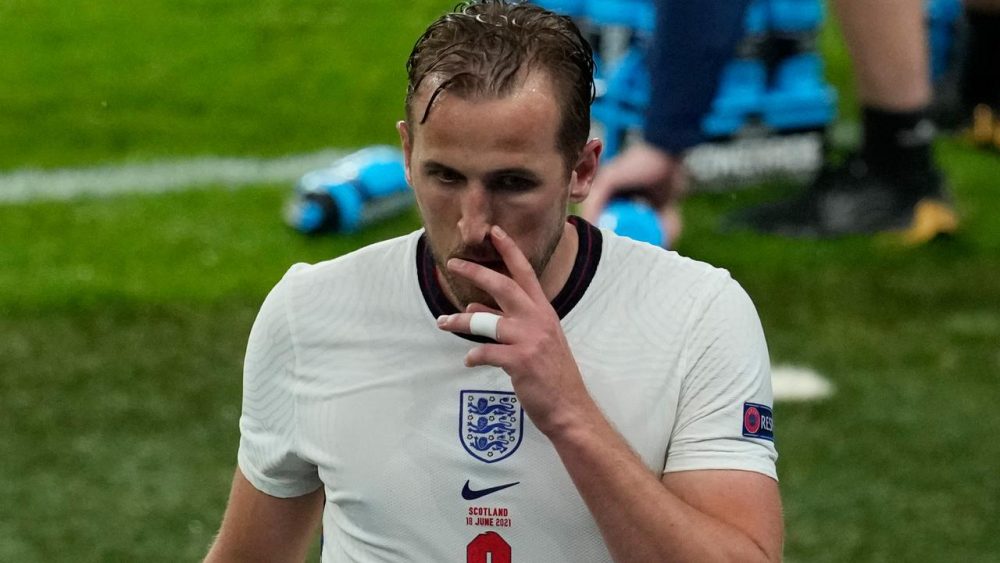 THE most anticipated game of the day saw Scotland win 0-0. As a result, the English team will be beheaded at the Tower of London midday today.

In perhaps the most moving scenes of the tournament so far, the English national anthem was drowned out by the boos of Scotland fans.

In an act of solidarity the Scotland team took the knee before kickoff, and England returned the favour by taking the night off.

England’s performance was more toothless than a meth addict while throughout the game Scotland looked more comfortable than a puppy sleeping on a bed of feathers.

Mystery still surrounds why Southgate didn’t pick Harry Kane for England’s Euros squad, but pressure will grow on the manager now with many asking if he should consider something called ‘tactics’ and ‘passing the ball forwards’.

Scotland set the tone from the off, seconds in Linden Dykes kneed Luke Shaw in the kidney while going up for a header.

But it wasn’t just Dykes’ knee and it wasn’t a knee at all; it was a blow struck by all of us and Shaw’s kidney was the Act of Union, Thatcher, Cromwell, Boris Johnson’s refusal to entertain a second Independence referendum, and Prince Andrew’s refusal to speak to the FBI.

Typified by an outstanding performance from 19-year-old Billy ‘Deep Fried Modric’ Gilmour, England were out-fought, out-paced and out-arsed by a calm and assured Scotland.

England’s best and only real chance saw John Stones hit the post with a header after finding himself freer than a complimentary chocolate on a hotel pillow.

At the other end Dykes had shot cleared off the line by James and O’Donnell’s shot was saved by Pickford, in egregious acts of spoiling the fun.

England’s plight was so dire that in the 63rd minute they called upon Ireland reject Jack Grealish and his tiny shinpads to rescue the game, but he spent more time on the floor than a doormat.

There was a penalty shout when Robertson trod on Sterling in the box but Scottish VAR confirmed he dinnae fucking touch the wee diving bastard.

In a welcome change for the England players they were booed by their fans for an abject performance rather than for taking a knee in opposition to racism.

In the early game Sweden beat Slovakia in a game more numbing than a factory full of anesthetic.

The 5pm kick between Croatia and the Czech Republic was at times as ill-tempered as a sleep deprived toddler.

The game will be remembered for Schick being elbowed in the box by Lovren. The Spanish referee’s decision to award a penalty was the most controversial awarding of something since Warren Beatty read out La La Land as Best Picture winner at the Oscars.

Following Schick’s conversion of the penalty Perisic evened things up, and no, we’ve no idea what that weird circle on the back Kovacic’s neck is either.

Today’s games see France Hungary for another win, Ronaldo picturing the German starting 11 as big Coke bottles in the 5pm kick off and at 8pm Spain will produce more passes than a Danny Healy Rae appearance on Mastermind in their game against one-man team Robert Lewandowski.