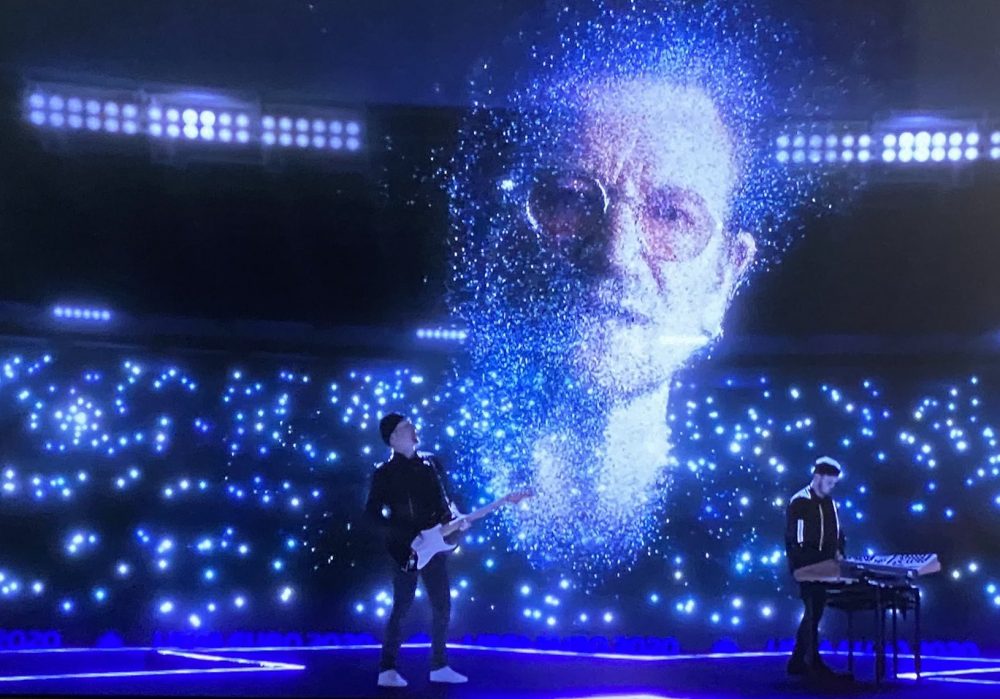 THE long wait for the European Championships is finally over, but before viewers could actually watch Italy v Turkey they had to first sit through the opening ceremony in Rome:

The soaring majesty of Andrea Bocelli’s rendition of Nessun Dorma produced more goosebumps than R.L Stine’s back catalogue, while a woman covered in glitter she bought in Dealz awkwardly danced in the background.

UPDATE: Holy shit, she’s flying! We take it all back!

The opening ceremony took a turn for the awful as the disembodied head of Bono appeared in what looked like an audition for a Wizard of Odd Middle Aged Men remake.

It was later revealed Bono’s consciousness had been uploaded to the iCloud after failing to read the small print T&Cs of U2’s infamous iTunes deal for their ‘Songs of Innocence’ album.

Joining DJ Martin Garrix, Bono and the Edge were there to sing only Euros anthem ‘We Are The People’. Not only clearly working from home, they decided to phone it in too and delivered the sort of tune that would finish outside the top 5 in Estonia’s competition to find their next Eurovision entry.

A song so generic and soulless it could be turned into a Dublin hotel.

It was finally time for the football. As has been the ancient custom at football games since the modern game’s foundation in 1863, a car covered in a sponsor’s logo delivered the ball to the centre circle for kick off.

However, anyone looking forward to seeing the remote controlled car badly injure a player before a game will be disappointed to learn the supposedly electric VW car has now been embroiled in a carbon emissions scandal and will no longer participate in the tournament.

After catching sight of the Italian coaching staff in their suits, the best dressed competition at the Euros has already concluded.

Clearly buoyed by the presence of fans in the stadium the Italian players delivered a stirring rendition of the national anthem so loud and out of tune it resembled a 4am sing song at an Irish wedding exclusively populated by drunk uncles called Seamus.

On the front foot from the off and utilising relentless patterns of quick passing the Italians pinned Turkey back in their own half forcing commentators into having the repeat hard-to-pronounce Turkish defenders’ name as they made desperate clearances, leading to several dislocated tongues.

Captained by Giorgio Chiellini, the world’s oldest looking 36-year-old, and with a line up comprised of names that sound like they’d make delicious pasta dishes (Locatelli, Spinazzola, Florenzi), the Italians went in at halftime the happier side but the game was still at 0-0.

Own goal was briefly the top scorer at the tournament before Immobile added Italy’s second with Insigne capping off a statement 3-0 win with a classy finish.

Despite the win, pedantic football fans have asked UEFA to look into docking Italy points for wearing an away jersey while at home against opponents whose kit doesn’t clash with blue.

Meanwhile in WhatsApp groups, a record number of messages claiming ‘Turkey are my dark horses for the whole thing’ have been deleted.

UEFA defended the poor viewing figures for the game across Europe, explaining that they hadn’t realised the game clashed with League of Ireland fixtures being played at the same time.

Over on the punditry side of things, BBC viewers complained to the broadcaster that it was cruel and inhumane to force two-time Euros winner Cesc Fabregas share the studio with Alan Shearer and Rio Ferdinand.

Emerging like Bobby Ewing from the shower in Dallas Liam Brady made a shock return to RTÉ, prompting the nation’s Dads to say ‘finally, someone who knows what he’s fecking talking about’. Stephen Kelly confirmed he will continue to commentate with the wide-eyed enthusiasm and excitement of a kid on a school tour to Tayto Park for the duration of the tournament.

Today’s action sees Wales hoping all golf courses near Baku are closed and Gareth Bale turns up for their game against Switzerland. Everyone’s new favourite dark horses now that Turkey have been stuffed Denmark, play tournament first timers Finland while nailed on smei-final bottlers Belgium take on definitely not doped up Russia.