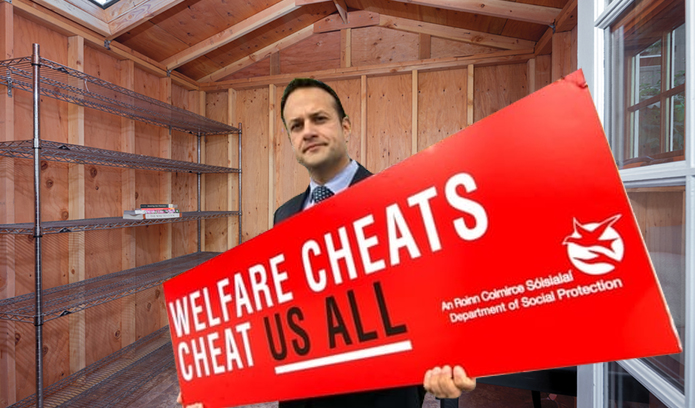 “DOES this even still fit me?” laughed Tánaiste Leo Varadkar today, after his iconic sign from the ‘Welfare Cheats Cheat Us All’ ad campaign turned up during a clear-out of his garden shed today.

The clean up was prompted by the government’s announcement of the gradual reduction and phasing out of the Pandemic Unemployment Payments, sending the Fine Gael leader into a nostalgia spiral.

“Wait a second, ok, someone take a picture of me now… let’s see if I remember the face, it was something like this” he added, posing with the sign in an uncanny reproduction of his classic pouting pose from 2016, when he was serving as Minister For Social Protection and had had enough of those lousy poor people getting more than they were allowed.

“It’s mad how fast time goes. One year you’re claiming that dole mongers are stealing 14 million from the taxpayer, the next year you’re arguing that you don’t want 13 billion of unpaid tax from Apple, and you’ll go to the highest courts in the world to refuse it” sighed Varadkar, reminiscing on the good times.

“I should probably throw a lot of this out, but it seems the nation has either forgiven me for it, forgotten about it, or bought into the whole ‘your neighbour is robbing your money’ message we wanted them to believe”.

Turning back to his shed to get it finished up in time to make accusatory remarks about Sinn Féin surrounding the housing crisis, Varadkar also turned up the letter from his time as Minister for Health where he cut 12 million from mental health services, as well as a big scrapbook of all the times he said he’d never go into government with Fianna Fáil.