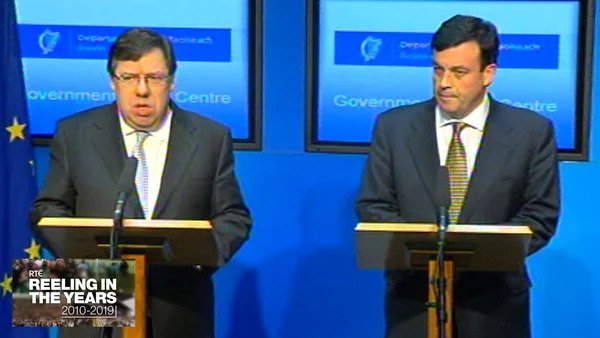 VIEWERS watching the new season of Reeling In The Years last night were said to be left flabbergasted at how docile and subservient the Irish people once were, leaving many disappointed with how a generation dealt with the situation all round.

“Imagine handing over your entire country to a handful of people to run it for you and to call all the shots,” tweeted one woman, who has been at home isolating for the past 13 months, “to think people were so obedient and trusting back then actually makes me sick”.

Sunday night’s episode focused on 2010, a year that saw Ireland come to grips with the economic recession that ended up crippling the nation and causing years of incalculable physical, societal and emotional damage.

“Imagine putting a huge debt like that on the people instead of those who actually caused the debt in the first place,” echoed another shocked viewer, unaware a similar debt was now looming due to Covid subsidies that would be paid for through taxes and swingeing cuts.

Speaking of the 2010 bailout, financial experts pointed to the particularly important lessons learned from 11 years ago, mainly that nothing ever changes and that banks will always come out on top no matter what the crisis is.

“When you print the main commodity that the entire planet depends on it’s kind of hard to fail,” he said, before showing more optimism for the Covid financial crisis than the 2008 banking crash, “at least this time the banks are not in a rush to reclaim the huge loans they’ve given out, so we can all pay them back slowly over the next ten years, or whenever they decide to do another financial reset to try undo years of poor practice”.