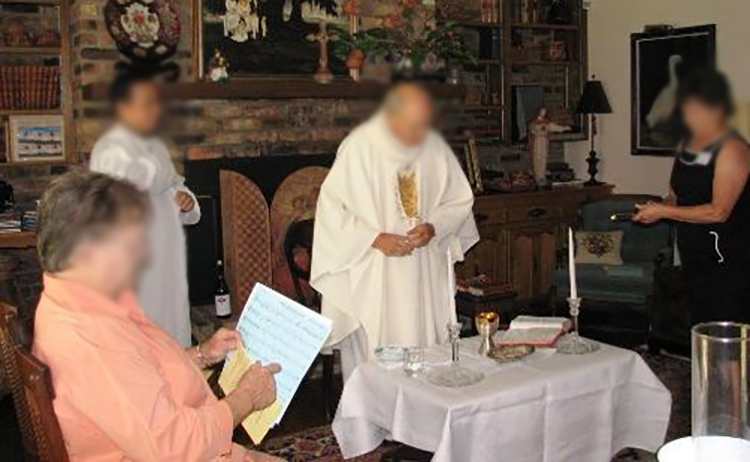 WITH dozens of rogue Irish priests being threatened with fines for orchestrating illegal masses across the country over the past 12 months, WWN travels to county Tipperary to attend what has commonly become to be known as a Godbeen, where scenes of Ireland’s underground masses are rife.

Disguised as 6-foot 2 elderly woman caped in a shawl, we managed to gain an invite from a local altar boy operating as a ‘black mass vendor’ who said he could guarantee a front row pew if the donation was right.

“Fifty gets you top of the queue for communion, a hundred gets you a live confession,” I was advised, before being shown a menu of tiered communion bread ranging from ‘speckled with the holy ghost’ to ‘double dipped with Christ’, both equally tempting in their own right, “there’s a fair slap off the speckled ones now; keep ya Christing for at least a week”.

Led to the back entrance of the priest’s house under the cover of night, we were astounded to see a large orderly queue, mumbling exerts from the gospels, dousing themselves in Lourdes’ finest quality, base H20.

“I get it sent through the mail straight from source,” one man tells me, offering me a splash of his bitcoin bought water, “never gets stopped by customs either, the big man must be looking over me”.

Our guide ushers us inside to a small oratory in the basement of the priest’s house. The room is now packed with all sorts of people, mostly elderly, white, leaving a musty rural shop from the 1980s smell in the air. We’re offered some hymns of praise for ten euros a pop. Upon reading them, it’s clear there were some real crackers in there. Money well spent.

“He’ll give it to you on your tongue if you’re lucky,” one pensioner winks at me, eyeing up a bowl of wafers in a gold-plated chalice.

The crowd hushes as the sound of a 10-hour long YouTube video of Big Ben chiming is played. The priest and his henchboys walk out, the irony of the British bongs lost on the revellers, all transfixed now on the underground priest.

“Blessed are thee who come in the name of our Lord,” Fr. X bellowed through what appears to be a PlayStation 3 microphone, earning a very enthusiastic round of applause.

“He really knows his crowd,” a man beside me whispered, clapping manically like a seal.

“The last mass was off the fucking chain… God forgive me,” another man responded, before blessing his curse away.

It was clear this underground mass was more chilled, more urban than mainstream masses I’ve attended.

We delved further after procession.

“‘If you’re interested, I know a few wet churches around too,” a parishioner informs me, awaiting live confession, “no Holy Communion, just straight up mass without all the Holy C. In and out in fifteen minutes – great for people on the go”.

We wondered how many of these churches were serving underground mass, all tax free, before realising to ourselves that all mass is tax free, regardless of location or current regulations.

“You got your Christenings, weddings, and of course the whole funeral end of things is booming at the mo. Cleaning up, really. I’ll probably lease a nice grey 212 Megane come June, nothing too fancy now or they’ll be talking, you know yourself,” Fr. X later explained the lucrative mass trade.

“Easter is the big one on Sunday. We found a site up the mountains here in the forestry and one of the other priests from a neighbouring diocese has a decent sound system rig. Expecting a few hundred at it now so it should be a decent auld gig. Plenty of holy water will be had”.