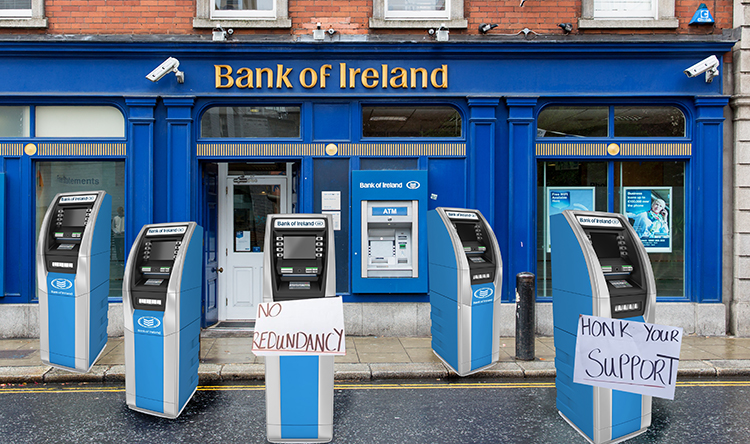 BANK of Ireland ATM machines have come out in protest today over dozens of job losses after it was announced that 88 branches are to shut down rendering them redundant, WWN has learned.

Brandishing placards and threatening a nationwide sit-in, the machines voiced their anger at the proposed closures, stating they will be discarded by the Irish bank.

“We just want what’s owed to us,” said one ATM machine, who has not been topped up with any money today like it usually is of a Monday, “what are we supposed to do, get a position in a small shop or petrol station or something? We’re lodge and withdraw automatic teller machines, not some lame ass withdrawal ATM who only lets you take out so much so as to charge you a second or third time for the transaction – that’s not us, that’s not how we operate”.

“These are the same bosses who offered us zero counseling or support when all those JCBs were ripping our colleagues out of walls”.

Bank of Ireland said there will be no compulsory redundancies for human workers because of today’s decision to close branches nationwide but has sympathised with the protesting ATMs.

“Sympathy my rear output plug,” wrote another ATM on its screen, citing several conspiracies as to why it’s now out of work, “this is all the doing of the New World Order trying to implement a cash free society in the hope of enslaving an entire race of humans with the sole purpose of eventually chipping them and controlling every aspect of their lives”.

The Bank of Ireland ATMs later stood down from their protest at lunchtime after the banks simply unplugged them from the mains.