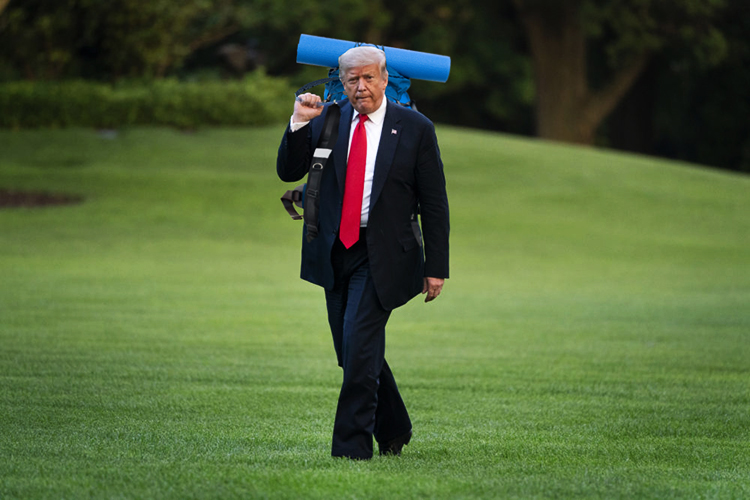 IF Donald Trump learned one thing from that time he watched a bit of American Gangster one night in the White House when there was nothing else on telly, it’s that every gangster should have a ‘go bag’; a case containing essentials that they can pick up and run with if the 5-O or feds arrive at the door.

With his second impeachment trial due to conclude shortly and the safety net of the presidency no longer under him, WWN has gained exclusive access to the contents of the former president’s grab-and-go satchel, to see what is essential for a Trump on the run:

Although many believe Trump to be a billionaire, his net worth stands at around 785 dollars, American. Every dime of this is in his Adidas hold-all bag ready to go when he is, along with a number of pieces of jewellery that he instructs Melania to swallow every morning so that she ‘has them on her’ if they have to bail in a hurry.

Also included in his stash is a number of small antiquities that he smuggled out of the White House when leaving, and the contact number of a guy he knows in New Jersey that can ‘get him a good price for them’.

Swiped from the Capitol building during the riot that has Trump in so much trouble to begin with, the 32GB usb key found its way to the president from a well-wisher who palmed the device before being politely lead out of Pelosi’s office by cops.

‘There’s bound to be something incriminating on that’, Trump was told, and they might very well be; if his cyber expert Baron can ever crack the password for it. The Trump team have tried all zeros, ‘NANCY’ in caps and in lower case, and even ‘TRUMP’ in case the speaker of the house used Donald’s name as a password because she’s obviously so in love with him. To date, they’ve been unable to access the key, but if they have to go on the run, they’ll have time.

3) A phone with four numbers saved on it

In case Donald has to flee without time to grab his phone, he has a spare one in the bag with every number he needs already programmed into it; Ivanka, Eric, Melania, and Ivanka (Home). Donald Trump Jnr does not feature on the list, and has been told it’s because this is the type of phone that only holds four numbers, sorry.

Should Trump go on the run, he’ll need to be able to blend in seamlessly no matter where he goes. Be faceless in a crowd. Draw no attention to himself. This is why he keeps a trademark Make America Great Again hat in his go bag.

By simply donning this hat, he effortlessly blends into any crowd of overweight angry white people who support the former president and all of his works and promises; crowds that number in the tens of millions across the USA, all in support of Trump, all looking forward to the chance to get him or their elected representative back into power as soon as possible.