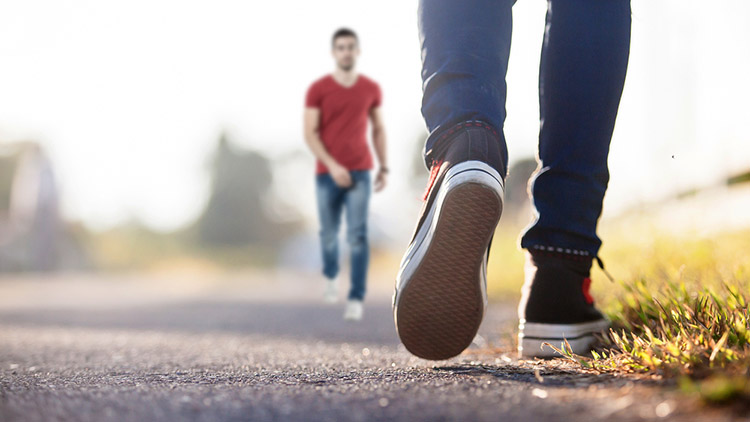 WITH more and more people walking in a bid to break up the monotonous day, the Footpath Safety Authority (FSA) has warned that instances of head-on collisions between pedestrians are spiraling out of control, with already 160 people injured so far this year.

“Footpath etiquette has gone out the window and people are becoming more adventurous when claiming their side of the walkway by playing games of mental chicken and not backing down,” a spokesperson for the FSA told this reporter before starting my investigation.

Taking to the street, I donned some cheap lycra pants, an epilepsy inducing reflective jacket and some trainers before heading out for a nice stroll along a local ring road, making sure to keep right on the footpath, adhering to the rules of the road.

However, it wasn’t long before the first challenge of the evening played out in front of me; an oncoming couple abreast, on my side, walking their dog.

“I’m not backing down,” I found myself thinking, realising the couple have now cleverly switched their mutt to the inside path – my side.

Pretending not to see them, I stood firm, tensing both shoulders, my heart now beating from the adrenaline of it all, preparing for impact.

“Excuse me, sorry!” the man stopped dead, now rightly forced into single file behind his partner, before continuing on like a little bitch.

“Yeah, keep walking, pal,” I said under my breath while the pair of chancers were far enough away not to hear me.

“That’s where it starts,” the FSA spokesman later told me, “once you make one person move out of the way it becomes addictive and you keep doing it until you meet someone, just like you, who won’t back down.

Accepting the FSA’s challenge, I decided to take to the left side of the path on my walk in a bid to prove I’m not some lame ass chicken, scared of crossing the footpath.

It was not long before my next challenger came to the fore; an elderly lady pulling a little tartan trolley. With the words of our FSA friends still ringing in my ear, I was not going to let this innocent frail woman get in my way.

Briefly looking up as she approached, the cunning pensioner caught my eye with a sympathetic stare, one only a sweet old grandmother could give, rendering my legs to jelly, and my heart to mush.

Images of ambulance crews working on her limp torso played out in my mind, while spiraling newspaper headlines like ‘Woman Killed In Head On Walking Collision’ across screens in the solemn scenes, before I was suddenly hit full whack in the face with a tartan trolley, finding myself being beaten down like a rabid dog.

“Stick to your own side of the path, you little prick, have some respect” I recalled the words of my unknown assailant to Gardaí, followed by my detailed description, “She was a big woman now; probably a body builder. On steroids, I’d say”.

Concluding my investigation, this reporter learned his lesson; playing footpath chicken is a dangerous game and tartan trollies pack quite the punch. Stick to your side and you’ll be okay and expect the unexpected.

This was a safety message from the FSA.