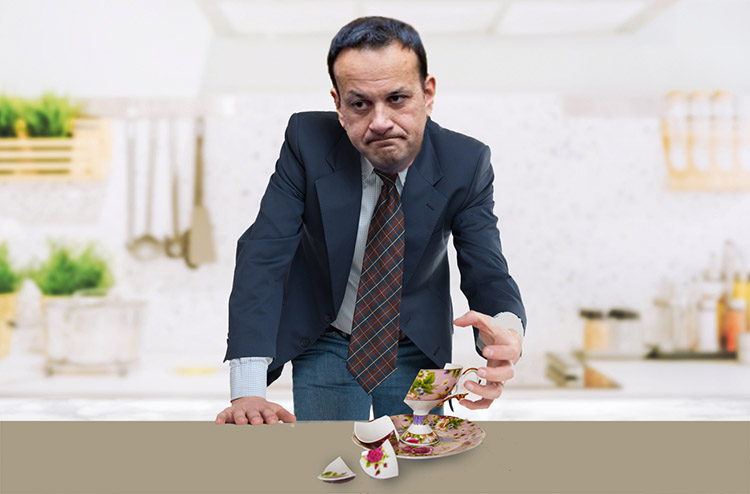 A NEW opinion poll which showed Sinn Féin as the number one political party in Ireland has caused Tánaiste Leo Varadkar to become so angry he almost kicked one of the peacocks on his grounds to death, WWN can reveal.

“Get me the spin team, tell them I want an article about how the mutant Brazilian Covid strain can be traced back to the Bobby Storey funeral on the front page of every newspaper in Ireland tomorrow morning” screamed Varadkar, while picking the fragments of a priceless china mug out of his hand, after he shattered it with a single squeeze upon hearing the news.

“One point higher than Fine Gael? I think not. Get whoever conducted this poll on the line, now. They’re about to learn a lesson in the true nature of polling in this country. You poll who I say, when I say so. You don’t just go out and ask any yahoo on the street how well the government is doing, of course these plebs are going to say Sinn Féin are better. It’s all a joke to them, the Carling drinking, Celtic-top wearing unwashed fuckers”.

Brushing aside the notion that his party’s low poll numbers might have something to do with the leaky actions of a certain leaker, Varadkar doubled down on his resolve to oar the IRA into more discussions going forward.

“It’s intimidation, that’s what it is; people are afraid to say Fine Gael in case they get kneecapped” said Varadkar, seriously.

“From now on, no pollster should have an accent from north of the Liffey. That should sort things out”.