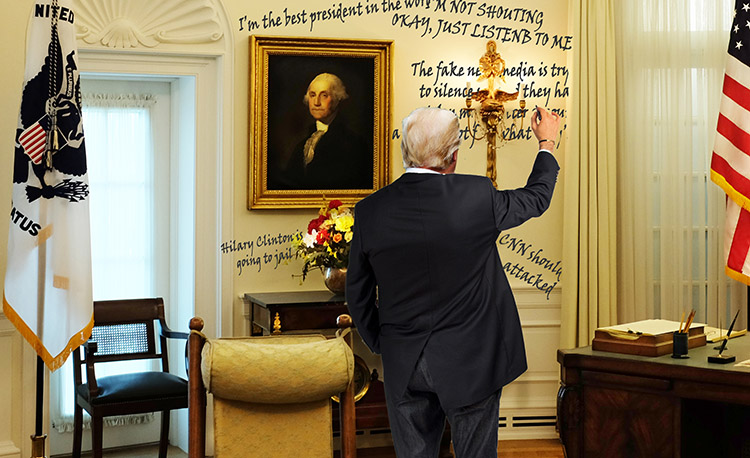 AS HOUSE Democrats in America keep themselves busy by introducing articles of impeachment for the outgoing president, a shivering and sweating Donald Trump is still struggling with social media withdrawals having been banned from Twitter, Facebook, Instagram, Pinterest, Twitch and Bebo.

“Haven’t had any insurrection issues! JUST ASK MELANIA!” Trump scrawled next, presumably in response to reports that Trump supporting domestic terrorists are plotting more attacks on Capitol Hill according to DC police.

“SO UNFAIR! Twitter will have low ratings without me” scrawled Trump in a feverish flurry of fury, condemning the social media giant for limiting his means of communication to just the White House press room and taking questions from the world’s biggest media outlets.

It has been reported that Trump’s children are growing frustrated by their father hovering over their shoulders any time they browse Facebook on their phone, begging for five minutes of social media time.

“This time out in the bold corner from Twitter has given the president time to reflect, reflect on how right he is about everything and that inciting violence is no big deal,” shared one aide who has been forced to write numbers of likes and retweet below each scrawl on the Oval Office wall.

“BIG ELECTION WIN! NO VIOLENCE! What next? Blaming 300,000 covfefe deaths on me, so stupid!” Trump hand-tweeted, his scrawl finishing halfway across a portrait of Andrew Jackson.

While the desecration of the Oval Office is nowhere near the damage wrought by his supporters on Capitol Hill several days ago, those officials who have yet to resign to save their own skins believe it is best to let Trump continue scrawling.

“Just let him tire himself out, it’s either this or he starts asking about the nuclear codes again”.