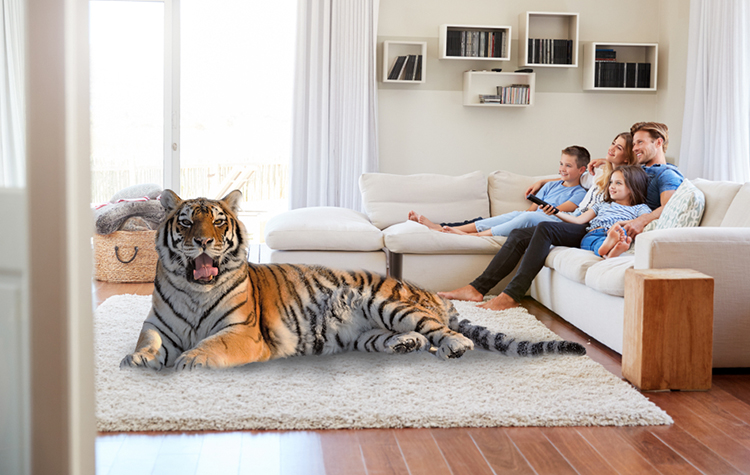 FACING A precarious financial crisis which could result in the full permanent closure of Dublin Zoo, officials at the zoo have turned to locals to help house and feed the animals until the necessary funding is found.

“We haven’t been paid in months and now I’ve t’live with this moldy prick who hogs the remote 24/7,” shared one elephant temporarily placed with 29-year-old IT worker Noel Ferritan, “I swear t’God if he bleedin’ watches another episode of Planet Earth I’ll fucking snap”.

Despite the well-meaning nature of the scheme it is already running into substantial problems.

“They’ve stuck me with a house of vegan hipsters in Stoneybatter, I can’t survive on fucking leaves,” snarled one tiger, who just fucking knows another ‘housemates meeting’ is going to called by Dearbhla when she finds out he’s eaten Aoife, “but look it, it beats standing there having strangers staring at you in the nip all day in your enclosure”.

Costing the zoo some €500,000 a month to feed the animals the adopt a pet push has seen Dubliners step up to the plate but it’s still too early to tell if this a viable short to medium term fix.

“They’re nice enough these Brazilian lads I’m living with but the queue for the shower in the morning is a pain in the hole and it’s so pokey I keeping banging my head off the ceiling,” offered one giraffe we spoke to.

Dubliners however are enjoying helping out.

“The mud baths have ruined the feckin’ garden, but she’s always good for a round of take away pints from the local,” shared Jenny Tolan of the hippo they’ve fostered.

To house an animal from Dublin Zoo click HERE.