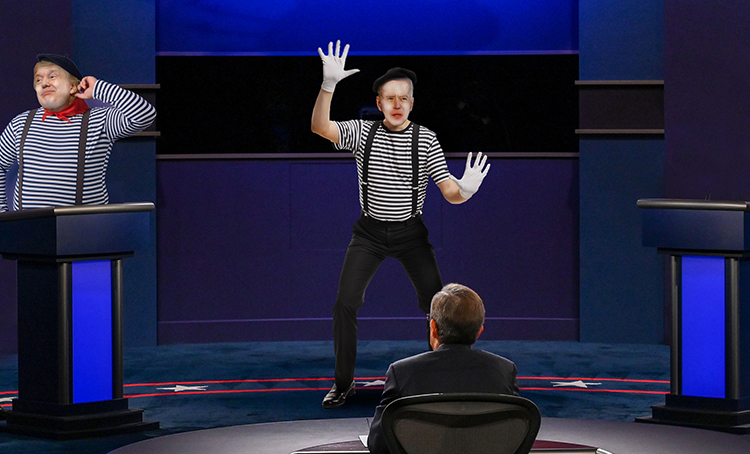 WITH NEWS that US presidential debate organisers plan on muting candidates’ microphones whenever there’s an interruption, it has now been confirmed that the final debate will as a result take place entirely through the art form of mime.

“We could sit here and pretend like Agent Orange isn’t going to just interrupt for 90 minutes but he is, so we’ve advised both candidates to brush up on their miming skills,” confirmed one debate official while gluing his finger to the ‘mute microphone’ button ahead of Thursday’s debate.

Joe Biden, leading in the polls, has welcomed the move as his team were planning on zipping his mouth shut until after polling day anyway, in a bid to avoid any last minute PR disasters.

“Donald’s really struggling on how to get it across to viewers at home through mime that Covid-19 is bullshit and only losers die from it, how all Mexicans are rapists and that if he loses the election fringe nutjobs on the right should get lockin’ and loadin'”, confirmed one debate prep Trump official, securing Trump in an imaginary glass box away from access to Twitter.

It is believed in a bid get his key policies across Trump will simply choose to aim his middle finger down the camera lens to the American people for 90 minutes, however, his camp have denied they have attached 8 additional arms to his suit to maximise his middle finger giving potential.