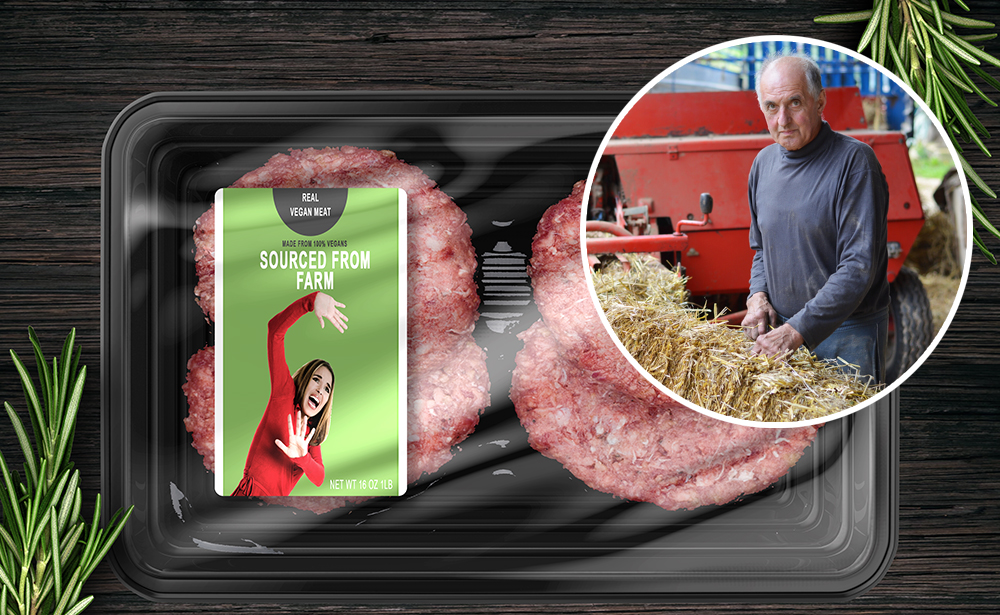 AS MODERN Irish farming continues to adapt and evolve to its impact on the planet, one enterprising Waterford beef farmer is causing a stir with his new farming venture.

“You’ll hear people saying ‘ah but it probably doesn’t taste like real beef’, but honestly, they’re as succulent as anything, if a little on the lean side,” confirmed Micheál Power, as he guided his flock of 200 corn fed vegans into a holding pen.

“I got the idea from them actually, they just wouldn’t shut up about alternatives to beef. Protesting my farm, day in, day out and then a light bulb went off. I can’t round up enough of them, that’s how big a demand there is for vegan food these days,” added Power as he stunned one hemp wearing, bee’s wax smelling vegan before beating them with a tenderiser.

All vegan burgers are labeled and can be traced back to a specific farm. Power shows one vegan burger marked as being sourced from ‘Roisin’ before the packaging goes on to list her hobbies which included ‘giving out to everybody about eating meat’ and ‘ordering everything off Amazon despite telling everyone on her Instagram to shop local’.

Power is one of several Irish farmers now supplying the growing demand for vegan products, and these farmers aren’t just limiting themselves to supplying the goods for delicious burgers.

“I’ve a lad down the town who’ll take the hide off them and make ya a lovely handbag, or a pair of boots. It’s all organic, it’s all sustainable,” confirmed Power, who explained that with every vegan successfully slaughtered, he is contributing positively to the fight against climate change by removing a carbon generating human from the planet.

“I’ll be keeping an eye out for the EU’s CAP subsidies for vegan food, those moany tree hugging pricks were right, vegan really is the future, cha-ching” concluded Power before munching into a burger.