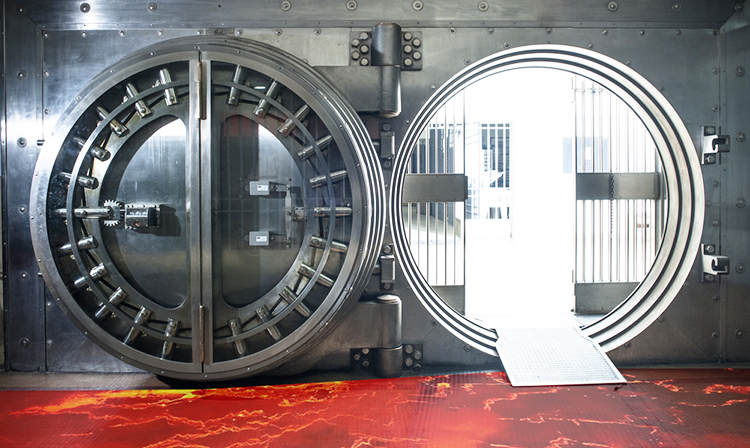 WITH campaigners calling on the government to not lock away records into Mother and Baby Homes, WWN goes subterranean to the 7km deep vault where the controversial documents will be kept sealed for the next 30 years after posing as elderly nuns who just wanted to burn some documents that were of ‘no importance’.

Excavated in Offaly at a cost of €34 billion in the 90s to hide sensitive government legal material, the entrance to the vault is hidden in a field under a cow trough, which, when pushed over, opens a door to the large tunnel beneath and a cable car type lift which brings us down for 7 kilometres.

“We keep a lot of government case findings down here, mostly Church related, so as you can imagine a lot of desperate people have tried and failed to reach the contents of this vault,” our government guide explains, before pointing to the remains, “there’s a Magdalene laundries victim there… oh! And there’s a couple of men who tried finding out where their Catholic priest abuser from the 1960s was relocated to – it’s mad how persistent some people are when it comes to acquiring information that should already be in the public domain”.

“It might seem like we’re really trying to hide the contents of the vault, but in fact this is basic protocol when it comes to storing legal documents in Ireland,” our government guide insists, reading from a pre-prepared statement.

The time locked vault shows several separate countdown clocks relating to certain documents, including a 74-year timer with a yellow post it note stating ‘Possible review in 25 years… NOT! Lol’.

“Oh that’s the two million documents from the redress bodies from the Commission to Inquire into Child Abuse,” the guide stated, “they contain the testimonies from representatives of 18 religious congregations, which managed residential institutions for children, so it’s very important we keep them, and the people responsible, safe from the public and their victims”.

Happy in the knowledge that the vault was indeed a secure and impenetrable place to keep sensitive information away from the prying public, we gently inquired as to whether the vault was also home to the current government’s only shred of human decency, which could prevent them from sealing the documents away for 30 years, our guide laughed uncontrollably, before stating: “Decency!? What made you think they had any to hide away in the first place?”