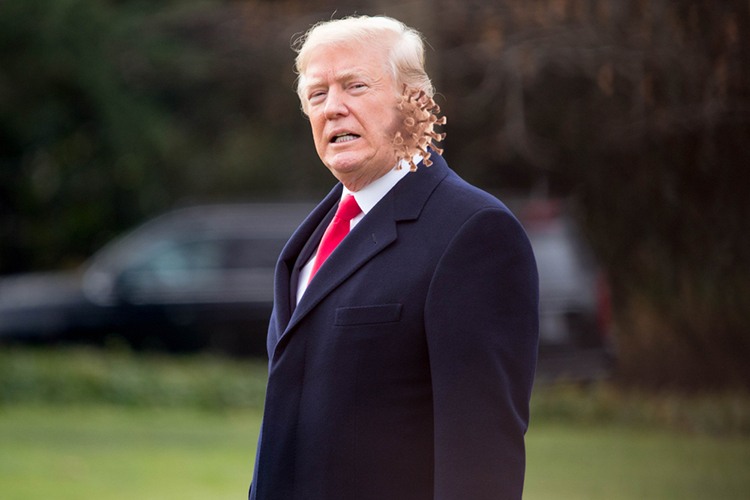 THE handful of White House staffers not yet infected by president Donald Trump expressed new worries about his condition shortly after he began conversing with the pulsating bulge of Covid-19 now emanating from his neck.

“What’s of most worry really is that his condition has taken such a bad turn, the symptons now include talking in clear and cogent sentences,” confirmed one aide, cowering behind a desk in the hopes the president, who now only responds to the name Super Spreader, doesn’t find her.

Bursting through the door of the room he was sealed into for everyone else’s safety, Trump began a fresh coughing spree as he bounded through the corridors, livid at the sight of healthy, Covid-19 free people still within his inner circle.

Gently caressing his neck bulge, Trump was heard gently whispering “there is much work, much much work to do” before leaning in closer and listening to the festering virus’ response.

“Yes, haha, yes!” an ecstatic Trump said concurring with whatever the pulsating mass whispered back.

“No, you’re mistaken, I haven’t got the virus, we have each other. She understands me,” Trump said now coughing on a White House intern, who used to think Monica Lewinsky had it bad.

Medical experts have speculated that the experimental cocktail of drugs Trump was pumped with could have inadvertently led to Covid-19 growing stronger and mutating with its host.

“Oh what wretched deeds we have done, we were all too arrogant. We didn’t account for the fact that the presence of such a high volume of spray tan could mix with the steroids to create something unholy, well, more unholy” one doctor, said as Super Spreader climbed to the top of the Washington Monument while evading missile from military jets.