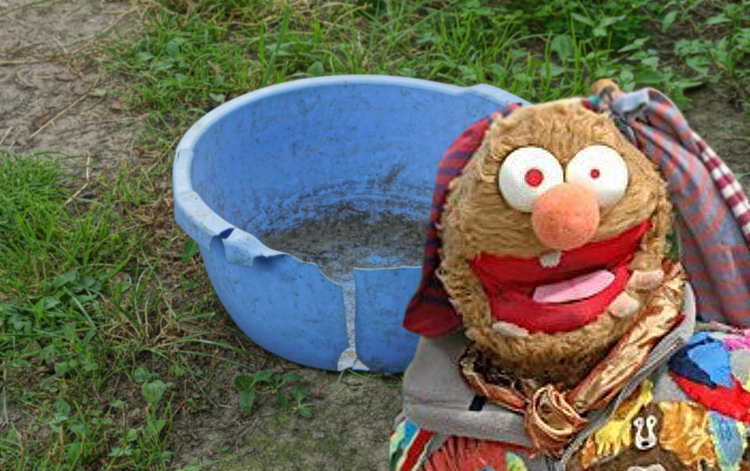 ONCE labelled a national hero for keeping Irish children entertained for hours after coming home from school, former children’s presenter Socky has slammed a recent announcement that The Den is to return to RTÉ, only this time seemingly without the sock monster.

We tracked Socky down to a laneway off of a popular Dublin street, the now tattered blue bucket appeared almost unrecognisable as its owner pleaded for some change.

“Socky looking for two euros,” a rather disheveled looking Socky begged, his head of socks now merged into one matted fabric mess, holes frayed from years of neglect, “Socky need food for blue bucket,” he added, before snapping into a more coherent Dublin twang, “okay asshole, youse either pay Socky two euros or piss off on out of here – this isn’t a free show”.

Astounded at Socky’s sudden personality change, and fearing for this reporter’s life, a brief exchange of five euros was had, but not before asking what had happened to the once popular children’s presenter.

“Typical RTÉ bureaucracy, man – just cancelled me one day and told me to get the hell out of Montrose with my bucket, and that was that – no reason, just discarded like an odd sock, Charlie Bird,” Socky explained, now rolling up some tobacco into a skin.

Socky briefly found accommodation and got off the streets but when Claire Byrne found him in her garden shed, he was kicked out.

“I heard those two big shots Zig and Zag are back. D’Arcy too. Where’s my fucking comeback, man? I was there when they all fucked off to MTV and Today FM. I held the fort while they made the big time. Then I got shafted and they decided to take the hand out of my arse and left me for dead”.

“I hear Zag’s only doing it ‘cus he needs money after a messy divorce. Serves him right for marrying Charlize Theron. Dustin acts all salt of the earth but not one phone call from him all these years. Snotser is on the gear and everyone knows it,” Socky revealed, before offering up his services, “hey, if you ever need a children’s entertainer for a birthday or Communion, give me a shout – I’ll work for cans”.