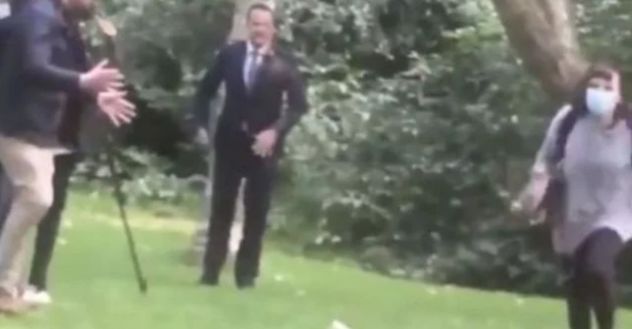 WHILE some have called footage of a young woman throwing a smoothie at Tanáiste Leo Varadkar ‘pathetic’ or the work of ‘a nuclear grade fucking eejit’, the more awake among us have quickly seen right through the event which was obviously staged by Varadkar’s handlers.

Come with WWN as we guide you by the trusted hand through the overwhelming evidence that the so-called smoothie attack was a false flag operation.

Second milkshaker on the grassy knoll

The young skateboarder didn’t even connect with the Tanáiste, the trajectory of the smoothie doesn’t come from the cup in her hand. It is clearer thrown form a nearby grass verge by someone who had military level smoothie throwing training.

What’s ‘Smoothie’ an anagram for?

‘I Hot Some’. Let that sink in. ‘I Hot Some’ is the secret code word which activates all of Ireland’s Mossad trained gay assassins. The arrogance; the Government, Fine Gael, Varadkar, George Soros’ pet goldfish, they didn’t even bother trying to hide what they were doing.

Has anyone even bothered to look out their window since this false flag operation happened? Surprise, surprise, the streets are flooded with Lady Gaga loving, fashion conscious assassins.

As you’re aware, each member of the cabinet is given its own private army for protection. She simply wouldn’t be allowed get that close to him. Where are the nearby government snipers? Where are the fighter jets? The tanks? The amphibious vehicles? The escape pod to Mars? Are we supposed to just believe that Ireland is that rare country where public representatives feel comfortable mingling with the general public? Laughable.

The attacker was a clear plant

Everyone knows no one has skated since the release of Tony Hawk’s Pro-Skater 3 in 2001. A clear plant, evidence points to her being a deciduous shrub.

“I thought it was Avril Lavigne”

Disgusting stuff from the Tanáiste trying to implement Sk8er Boi singer Lavigne in all this. Is this false flag event supposed to usher in a new set of laws that will see her extradited and stand trial? Nice try, but our extensive research shows that Lavigne last posted on Instagram on the 2nd of September. What does that prove? Varadkar, knowing her long standing hatred of him, had her killed weeks before she could even attempt a walk-by-smoothie.

The answer is in the lyrics to Sk8er Boy

“He was a boy. She was a girl. Can I make it any more obvious?” – it was right there in front of us this whole time. Lavigne warned us some 18 years ago, in this very song in a complex code. It is literally impossible for a girl to get the better of a boy ergo Varadkar would have stopped this from happening was it not for the fact that he is a secret Lizard upholding the New World Order.

Sk8er Boi being 18 years ago is significant here too because 18 divided by 2 is 9 which is equal to 4 plus 5, which the same number of fingers a hand has, and a hand was used to throw the smoothie!

Next, when we’re all impregnated with 5G masts you sheep will still act surprised even though we tried to warn you!