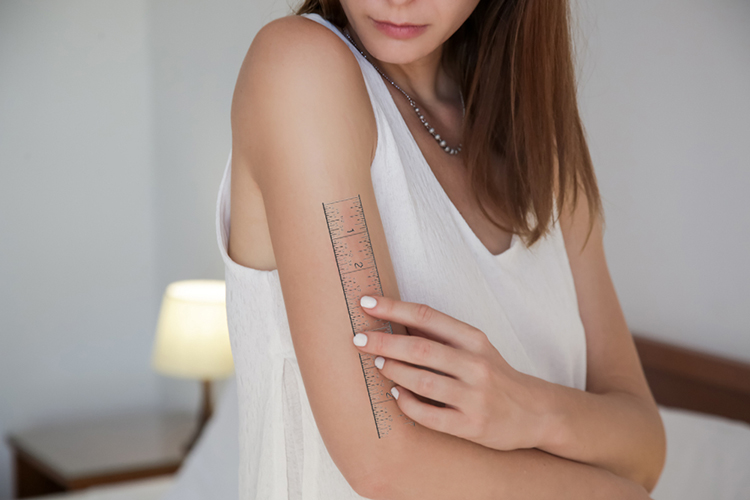 SEVERAL enterprising single women have begun to revolutionise the face of dating with the help of a simple, solitary tattoo.

Long since fed up with the tall tales men tell regarding penis length, we meet the women who got a to scale ruler inked onto their forearms.

“If lads had an inch for every time they claimed its ‘like a baby’s arm holding an apple’ their dicks could serve as a ladder to Mars. Once I got the tattoo everything changed,” remarked single-and-fucking-done-with-mingling Anna Pollock told WWN.

“When we’re in the bedroom and I reveal the tattoo you’d want to see some of them, they turn white as a sheet, some faint, some jump out the window, but the bullshit ends there and then,” added Pollock.

“Give men an inch, and they’ll claim 8 inches for the rest of their lives. When Anna showed me her tattoo I ran off to get one myself and it’s made my life so much easier,” Rebecca Hodges explained.

“And when you catch them out they give it the ‘oh, you were using the imperial scale? I meant 12 millimetres’, I can see why you’re disappointed now,” continued Hodges.

“It just saves a lot of bullshitting. Now, admittedly, they do a lot more crying and whimpering ‘your ruler must be wrong’,” added Ciara Morgan, the ink not yet dry on her arm.

Bravado-led exaggeration among men in regards to their manhood is now down 20%, with worrying reports of some men purposefully getting similar tattoos with centimetres incorrectly marked as inches.