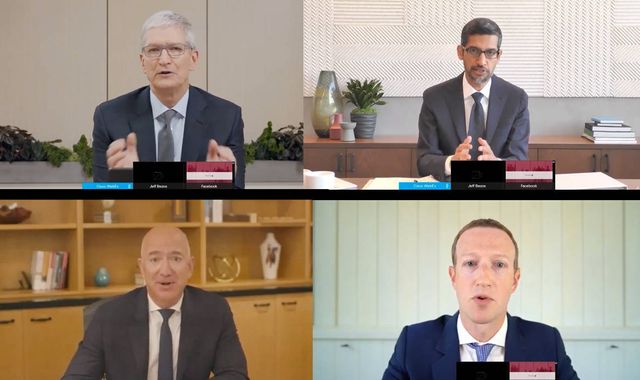 RESPONDING to a grilling by US politicians on destructive and un-American business practices while operating monopolies the CEOs of tech’s ‘Big Four’ Facebook, Google, Apple and Amazon all agreed that it would be a real shame if politicians online search histories were made free to view online.

“Or their Amazon purchase history, imagine being a right wing conservative ‘Christian’ politician and then everyone found out ‘Butt Boys Make The Good Noise 4’ DVD was your last purchase?” chimed one CEO in response to accusations his company abuses its market power and treats workers inhumanely.

“Oh my God, worse still, what if those Dick pics they send young female staff members on Messenger end up online?” remarked another CEO in response to accusations he repeatedly copies competitors’ features when they refuse to be bought out by him and allows his platform to operate as a megaphone for facists.

During a dramatic moment of questioning ‘technical difficulties’ were blamed after a pulsating red glow was seen emanating from the eyes of Bezos, Cook, Zuckerberg and Pichai when the possibility of breaking up the companies and their vice like grip on the market was mentioned.

“Jeez Louise, wouldn’t it be just the worst if Google Maps data was released to show how frequently Republican politicians were typing in ‘directions to the Kremlin’,” added another CEO.

Agonising instances of poor internet connections plagued the hearings meaning audio feeds for the Big Four CEOs stopped working any time they were asked an uncomfortable question they didn’t want to answer, but there was one refreshing moment of candour when the CEOs explained “we’re just like everyone else and only feast on the blood of the young once a week”.

“Sorry, you’re breaking up,” the tech CEOs said, unclear if it was a comment on the video call connection or a direct threat.