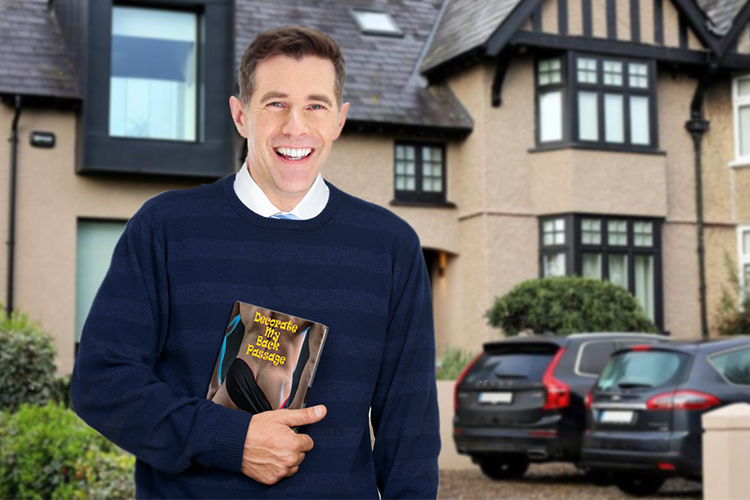 Envisioned by Bannon as the first instalment in his ’50 Shades of Natural Light’ trilogy, ‘Decorate My Back Passage’ tells the tale of a charismatic architect who puts the ‘fixer upper’ into his clients’ love lives.

“The inspiration for the novel came when my book publisher chucked a load of money in front of me and said Irish women would go mad for flicking their beans after a few glasses of wine to stupid shite like this, and viola, Decorate My Back Passage was born.”

The raunchy novel is filled with a variety of risque sexual encounters which utilise a number of classic sexual acts such as ‘knocking through the wall’, ‘converting the attic’, and ‘the outdoor bathtub’.

Following the adventures of handsome and successful house-doer-upper, Kermit Lannon, the suave main character is drawn into the marital disputes of his clients as they bicker over awnings and covings.

Instead of simply saying ‘pick the fucking triple glaze windows yiz middle class notiony bastards with more money than sense’, Lannon digs deeper with couples and helps them realise it isn’t the house than needs doing up, it’s their sex lives.

Lannon proceeds to guide couples to rediscover themselves sexually with his encyclopedic knowledge of ‘laying pipe’, ‘putting a patio down’ and ‘hiring a digger for the back garden’, barking orders from the corner of the bedroom, seated in a chair that somehow costs €800, all while munching a packet of Jacob’s Elite tea cakes.

“No, no, no, don’t be ridiculous, this isn’t some fantasy for me to realise through writing. It’s a serious literary pursuit,” confirmed Bannon, “The Lannon/Bannon thing is just a coincidence, we’re chalk and cheese; a world apart. C’mon the guy eats Elite, I’m a Tunnocks’ man for God Sake”.

All copies of ‘Decorate My Back Passage’ have already sold out after an insatiable crowd of women in their 40s named Eileen snapped them up. A reprint has been ordered and will be available to purchase soon.