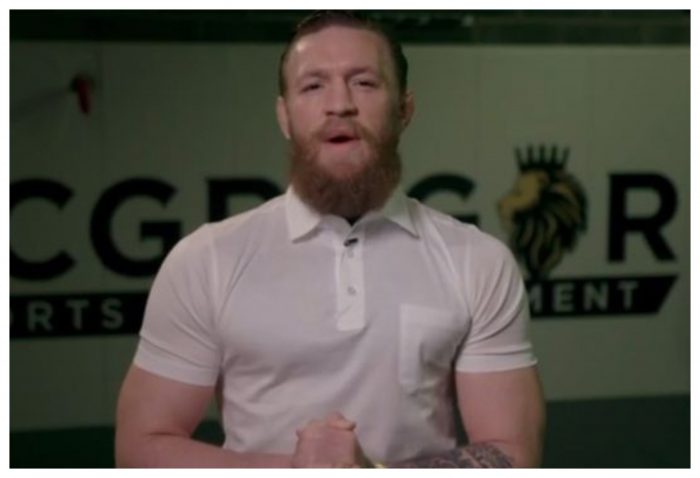 ADDRESSING his warrior people in the last week through multiple videos, part-time UFC fighter and full-time court hearing attender Conor McGregor has galvanised and focused people’s warrior brains, wisely urging them to go into lockdown mode rather than trying to box the head off the Covid-19 virus.

In addition to his influential video interventions which have proven crucial in getting the message to stay at home among the vast Conor McGregor lookalikes demographic of Ireland, the fighter has pledged €1 million in PPE purchasing power.

Here are 26 common thoughts everyone has had while watching the one-of-a-kind video broadcasts to the Irish nation and the world at large:

1) Judging by these videos, the supply of cocaine is unaffected by the current lockdown.

2) No seriously, at least there’s one industry still thriving during these difficult times.

3) Haven’t seen someone talking this enthusiastically about lockdowns and eroding civil liberties since that Austrian lad held a few rallies in Nuremberg.

4) This really happened. You are not high. You have not gone mad during self-isolation. Well, maybe you have but this is a thing that happened, he filmed a fucking call out video to a pandemic.

5) You may recognise this speaking style from your 9-year-old’s ‘what I did on my summer holidays’ back-to-school essay.

6) Wow, that’s weird, it’s been such a whirlwind few weeks, must have missed the news where Conor McGregor appointed himself president and starting doing presidential addresses from his gym.

7) Wait, maybe you can punch a virus. Has there been any legitimate studies into this? We need the research more than ever.

8) Quick someone occupy Conor by telling him to watch Tiger King on Netflix.

9) Imagine what he could have achieved in the Khabib fight with this energy?

10) “Let’s go Ireland”? Conor, that’s like the one thing we’ve been explicitly told not to do. We can’t go anywhere.

11) Ever the elite athlete, Conor has defied the odds and reached ‘day 305 of quarantine’, before anyone else.

12) Despite being told ‘it’ll do nothin’, as of last check Covid-19 has definitely done something.

13) My dreams are going to be haunted by McGregor repeating the phrase ‘Vice Admiral Mark Mallet’ over and over again.

14) Did… did he run of out breath from talking too enthusiastically? Is he gassed already? Typical Conor.

15) Seriously, those dying for their fix, could do worse than sliding into the DMs there and just straight up asking him for some.

17) Hey, isn’t this the guy that was on the cover of the New York Times once?

18) This address was strong and full bodied, everything Proper 12 whiskey isn’t.

19) Does Facebook allow you to delete someone else’s video?

20) Nice try motherfucker, but you can talk all you want about how important exercise and home workouts are – I ain’t doing shit.

21) “If you do not enter this game you cannot win it. Let your mind be a penny and life be your winning scratch card. Scrape victory from it. Harder than that. Oh fuck, now there’s scratch card debris everywhere. You have gotten it on my Gucci slippers.”

22) He’s mentioning God a lot these days, Heaven forbid this newfound faith has been brought on by some terrible news in his personal life, like a positive STD result.

23) Imagine if Conor took this sort of energy and filmed a motivational video addressing only himself ‘stop punching old lads in pubs’ – the motivational possibilities are endless.

24) The UFC could probably make a lot of money selling a Pay-Per-View event of people Mixed Martial Coughing on him.

25) When the great story of this incredible moment in human existence is told by historians, we beg of you, there’s no need to mention these videos to anyone; we’re embarrassed enough as it is.

26) This is great and all, but when is a hurl wielding Henry Shefflin address where he’s also demanding the closure of airports like he’s in charge? Or Roy Keane’s, for that matter?