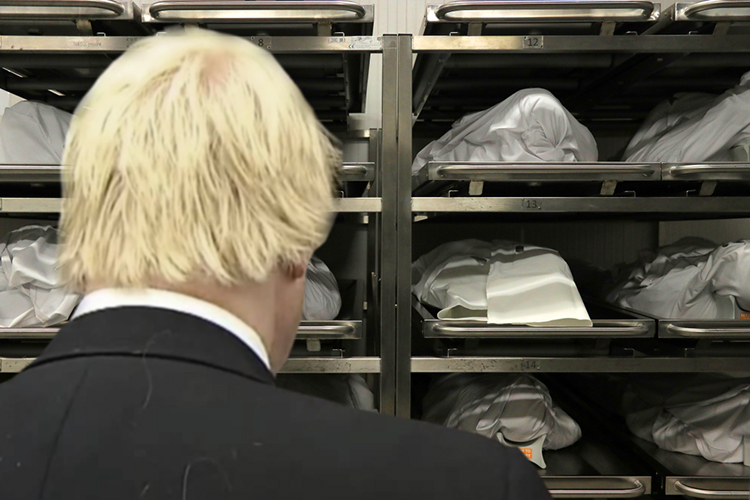 EVOKING the daring-do of the great generation that survived World War II, but won’t survive him, Britain’s PM Boris Johnson delivered an impassioned speech to a room of corpses which contracted and subsequently died from Covid-19.

“Keep calm and carry on, ” Johnson bellowed, delighted with how the markets have ‘rallied’ and the pound has ‘jumped up’ in response to his government’s prioritising of profit over people these past two weeks.

Despite the cold and stark surroundings of a near capacity morgue, Johnson, encouraged by the lack of dissenting voices among his captive audience, continued his speech full of vim and vigour.

“We shall socialise on the beaches, we shall congregate en masse on the landing grounds, we shall get pissed in the fields and in the streets, we shall lie to the hilt; we shall never surrender to logic and the haunting pleas from kindhearted nations begging us to save our own people and not make the same mistakes they did.”

“Oh, no wait, scratch that; close everything,” Johnson said in disagreement with himself for the 50th time this week.

Interrupted just as he was hitting his stride by a doctor at the end of their tether, Johnson labelled the doctor’s talk of the corpses having no pulse as typical of the ‘project fear’ presided over by ‘experts’ everyone had long had enough of.

Johnson reminded the corpses of how they could be confident ‘increased levels of testing were on their way’ after he wrote it on the side of a bus rammed full of people somehow still going to and from work in their droves.

“Follow my lead when it comes those children of mine that I refuse to admit to exist; simply remain socially distant,” Johnson concluded, before asking to be left alone with the corpses for as long as it takes him to remove any valuables, such as wedding rings, wallets and watches.